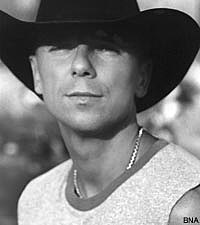 "Blue Chair Bay is kind of like the place we'd all like to go if we had no obligations or nowhere to be," Kenny tells PEOPLE. "That's what I want this clothing line to represent. These are the clothes I would pack to go to this place."

The casual pieces, for both women and men, are intended to be like "that favorite T-shirt that you've washed a lot that is kind of sun bleached ... your favorite khakis, and your shirt that you've had forever," Kenny says.

More than just adding his name to the designs, Kenny was so involved in every step that he even adds friends' names to some of the items. "I've got a shirt that says 'Bob's Charter,' and Bob is a buddy of mine that's been living in the islands for a long time," he reports.

The affordable clothing line, with prices ranging from $35 for a T-shirt up to $72 for a pair of khaki pants, can be found at select stores in Key West, Fla., Gulf Shores, Ala., and Nashville, Tenn.