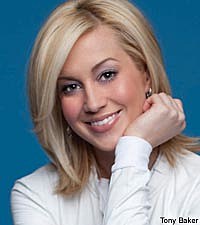 Summer's coming to a close, and the kids are headed back to school. In that spirit, we thought we'd surprise fun-loving Kellie Pickler with our special version of a "pop quiz." Kellie, who went "back to school" in 2007 as a contestant on 'Are You Smarter Than a 5th Grader?' is back on the bus, too. But this time she's riding in style, tagging along on buddy Taylor Swift's Fearless tour.

The Boot hung out on the bus with Kellie as she put on her eyelashes, before hitting the concert stage. We threw a few quick questions her way, asking her to reply with the first thing that popped into her mind:

Whose cell phone number do you wish you had?

Clint Eastwood's! I'm in love with Clint Eastwood! I don't care (that he's older). He is the man! I just think he's awesome. I love all his movies. He's an incredible director. I'm a huge fan.

If you could clone one man (besides Clint Eastwood) and keep him all to yourself, who would you pick?

I don't need a man. I'd clone myself. The world needs two Picklers.

There's an old saying: "Blondes have more fun." Why do you think that is?

I don't know. I've met some pretty boring blondes. [laughs] There are some kick-ass redheads. I actually want to be a redhead. Redheads -- they kind of beat us. I'd much rather be a redhead than a blonde.

Finish this sentence: I hope I never...

And this one: I don't have patience for people who ...

.. complain all the time. I just want to slap them and say, 'Get the hell over it.' Everybody's got problems! Seriously, I went through stages before where I was so depressed and so under the rock, but you read about these other people in foreign countries who have it bad. I don't have it bad. I have people who come up to me and tell me they feel sorry for my childhood. I would take my childhood over so many others'. There are so many people who've got it worse than I'll ever think about. We can't ever grasp how bad they have it.

What's a deal breaker for you in a friendship?

Someone who's not trustworthy. I think trust is such a big thing, because with trust comes respect. I can't stand to be around people who lie. You've got to be able to trust someone.

How do you mend a broken heart?

You don't. You write songs about it, and then make sure they hear it on the radio. [laughs] And then they end up calling you and wanting you back, and it's great. [laughs] Kidding! It makes you feel good to be able to get the last laugh. No, I think the best thing for that is to surround yourself with people who love you and your friends -- they're going to be there.

How many times a day do you look in the mirror?

[laughs] Every time I walk past one. It's not like a (vanity) thing. It's just when you see a mirror, a lot of times I think it's somebody else, and I have to check to make sure it's me. [laughs] If you walk by and there's a person there, you always just look at the person walking by you. And then you realize your makeup is messed up, and you have to stop for a second to fix it or fix your hair.

If you could ask Simon Cowell one personal question, what would it be?

I'd probably ask him if I could have that Bentley he drives. [Or] if he'd ever consider wearing a different color T-shirt.