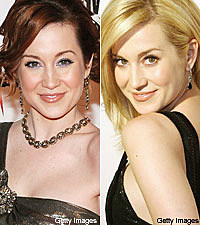 Kellie Pickler's recent re-"do," turning her blond tresses red, was pretty popular with Boot readers, by a margin of three to one. But all it took was one comment to change Kellie's mind about the new look!

"My dad saw me, told me I looked like my mom," Kellie revealed to MusicCity TV. "So I changed it back to blond."

As Kellie fans are aware, the singer is estranged from her mother, Cynthia Malone, who abandoned Kellie when she was just two years old. Kellie wrote 'I Wonder,' from her debut album, about her mother and delivered an emotional rendition of the song at the 2007 CMA Awards.

Kellie adds she is "gradually" getting back to blond. "I don't want to do too much now because I don't want it to fall out. Blonde is hard to get to," she notes.

Before she made the change to red, Kellie hinted to The Boot that she was interested in being a redhead someday. But after the change, the singer couldn't understand what all the fuss was about, telling us, "It's just hair! Some people don't even have hair. So, while I have my hair, I'm going to play with it and experiment with it. When you get people that are just like, 'Oh my gosh, you're so much better as a blond,' it's like where are your priorities?"

One of Kellie's priorities this week was to help present the leaders of Metro Nashville schools with a check for $1,066,632. The money, donated by the Country Music Association through their 'Keep the Music Playing' program, came from the proceeds of this past summer's CMA Music Festival. The check presentation at the Schermerhorn Symphony Center was followed by a performance from a group of students dubbed the 'Keep the Music Playing' All-Stars.