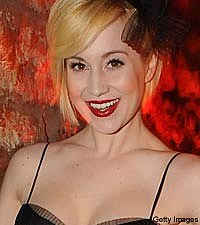 Kellie Pickler is almost as excited about the accompanying video as she is for her new single, 'Makin' Me Fall In Love Again.' The clip, filmed on a rare day off from the Fearless tour with Taylor Swift, was shot while Kellie was battling a painful injury. Still, the 'American Idol' alum says the pain was more than worth the outcome.

"That week, I'd sprained my ankle really bad and torn some ligaments in my ankle," she tells GAC. "So the whole day of the shoot, when I'd wear heels, every time they'd say, 'Cut!' I'd just have to take my shoe off. By the end of the day, my whole foot was so swollen, I couldn't even fit a shoe on it. There's a scene of me sitting on a couch in the video. I'm wearing one shoe and I had to hide my other foot because it was so swollen!"

The video (watch it below) is set in the 1940s. Kellie says she chose that era because of the way women were portrayed back then. "I just love how beautiful the women were," she gushes. "The women were more 'womanly'-looking. They had curves. They had beautiful fair skin. It was just more natural."

Kellie admits that she also thinks -- over 70 years later -- we still have much to learn from that era. "The way women were viewed back then is just so different than what the definition of beauty is today," she says. "I mean, people still always bring up Marilyn Monroe. Marilyn Monroe was not deathly skinny, you know? She had beautiful curves. She was a woman. So I wanted to embrace that."

Nominated for a CMT Award for her video with Taylor, 'Best Days of Your Life,' Kellie is getting ready to hit the road next month with Rascal Flatts on their Nothing Like This tour, where she will share opening act duties with newcomer Chris Young. Click here for tour dates.