Even though she looks like a million dollars, Kellie Pickler is glad her interview with The Boot isn't on camera. The country star strolls into our studios straight from an appearance on 'The Today Show,' eager to de-glam. After changing into jeans and a t-shirt, she curls up on our couch barefooted, sucking on a cherry red popsicle as she excitedly talks about her new, self-titled album.

"I feel like it's gonna grow legs and walk," she jokes, staring at a copy of her own CD, as if it's surreal.

Pickler, who co-wrote five songs on her impressive sophomore effort, is beaming with pride and anxious to get feedback on the new music. She says there's "really no comparison" between it and her first album, 'Small Town Girl,' which was the very first CD released of all the contestants on her season of 'American Idol.'

"The first album was so extremely rushed," she tells The Boot. "I was in the middle of the 'American Idol' tour, and my producer would fly all over the country to wherever I was that night. And I'd come off the stage, get in the car and run to the nearest studio ... Everyone can't believe it when I tell them this, but the songs I did write on the first album -- 'I Wonder' and 'Red High Heels' -- I actually wrote over the phone!" 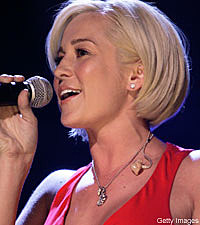 With the new CD, Pickler had two crucial elements she didn't have with her first: time and confidence. She switched producers, teamed up with some of Nashville's most celebrated songwriters and made an album she says is much more indicative of who she is, personally and professionally.

"I was able to make it exactly the way that I want it. I've had two years to play around," she says. "I had time to make sure I was in love with every song, and I was involved in every aspect of this album."

The petite beauty also insists she's done a lot of growing up in two years. She's been through very public heartache, both in her family life and love life, but it's weathering those storms that has made her a stronger singer and songwriter. The Kellie Pickler in front of us today has come a long way from the 19-year-old Sonic waitress from Albemarle, N.C., who almost walked out of her 'Idol' audition, thinking she wasn't good enough.

"I've learned so much about the music business and about myself," she says of her post 'Idol' years. "If I could go back and talk to the girl who auditioned for 'American Idol,' I'd tell her to be more confident ... I was just so nervous and insecure. So that was a big obstacle for me."

When we asked Pickler her favorite song on the new album, it was hard for her to pick just one. So we got the story behind several of the album's standouts. Read on below, as we ask her about four of her co-writes and one track that's already burning up the charts.

'Best Days of Your Life' is such a great kiss-off song. Does the real-life guy in the song know it's about him?

He does. It's so funny. Taylor (Swift) and I wrote it last year when we were on tour with Brad (Paisley). And I did an interview with one of the radio stations that was syndicated, so he just happened to hear it. And I was talking about how we wrote it about an ex who I'd just gone through a bad breakup with. So it was obvious who it was about, because I haven't dated that many people! So he called me, and he wasn't happy. So that's why everyone should go through life and treat others the way they want to be treated. You never know, that kid you picked on in school, made fun of and shoved in lockers -- he's gonna be the CEO of a company that you're applying for. The tables always turn. You reap what you sow, and karma is a bitch! [laughs]

What's the story behind 'Somebody to Love Me'?

I was in a really dark place where everything in my career was going great -- I'd just gotten a standing ovation at the CMAs, my album was doing well, I had just finished touring with Brad Paisley ... So everything was going great in my career, but everything in my personal life was just crumbling. So I wrote Aimee (Mayo) an email about how lonely I was: 'I have everything a girl could ask for, but I'm so miserable. I hate my life. I don't like who I am. I'm not happy. I'm lonely. I just want somebody to love me.' Then I hit 'send,' and it was like 2 or 3 in the morning and she wrote right back and said, 'We have to write that!' So it's one of my favorite songs I've ever written. I think it's a standout on the album, because it's so universal. We all have that one thing in common: we all want to be loved and accepted for being ourselves.

Hopefully it's not him you're singing about in 'One Last Time' -- a song about getting intimate with an ex.

That song is just so different from anything I've ever written. It opens a real door that people might not have known about me. It's a very intimate song, and a lot of people relate to it. Everyone at some time has been in a relationship that they knew wasn't good for them, and they've tried the whole break up and get back together, break up and get back together -- and you've cried, and you love each other one day and hate each other the next. You know it's not right, so just end it with a bang. [laughs]

What has been the fan response to the current single, 'Don't You Know You're Beautiful'?

The feedback has been amazing. It's good to have a song that makes you feel good, that's positive and uplifting.

Next: Kellie Talks Rumors and Romance