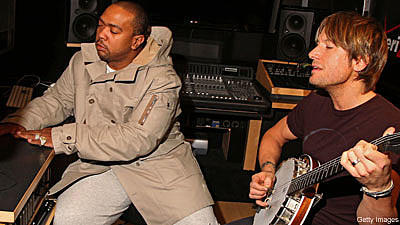 Keith Urban is working with famed rapper/producer Timbaland on a special collaboration announced Wednesday night at Urban's concert in New York City. This photo was taken just before the show, during which Timbaland was fast and furiously producing a live performance by the country superstar. The yet-to-be-announced song will be available to Verizon Blackberry Storm customers.