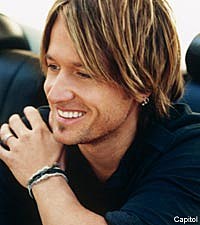 Keith Urban literally glows when he speaks about his role as a father. Daughter Sunday Rose, with wife Nicole Kidman, is nearing her second birthday, and she is beginning to really take on physical characteristics of both of her parents.

"She's a good mix [of the two of us], I think," said Keith backstage at the CMA Music Festival at Nashville's LP Field. "She's got my wife's legs, that's for sure."

With Father's Day around the corner, he explained what he thought was the best part of being a father. "All of it! It's always something new, that's what I love about it," the superstar gushed. "And maybe [other] dads are different, but for me, it keeps coming on. I'm like, 'Oh my God, that's my daughter.' It's beautiful. Absolutely beautiful. I feel very grateful for it."

While Keith cannot say enough about being a father, he won't be celebrating Dad's Day this Sunday. It is actually a special day for someone else -- his wife's birthday. Since they both grew up in Australia, they decided to celebrate the Australian Father's Day, which takes place on September 6. "What I did is I took the liberty of recognizing that we have dual countries going on and Father's Day is different in Australia," he said. "It's in September. So, I said to Nic, 'Because your birthday is June 20, we'll forgo Father's Day. We'll honor the Australian one this year, and we'll go back to the American one when it doesn't fall on your birthday." He adds, "I can't be taking the day away. I'd rather it be about her, so I'll celebrate it in September."

With their joy at having a daughter together, will Keith and Nicole be having another one soon? "I'm not, not trying," he laughs, "so we'll see."

Keith is set to perform at Chicago's Soldier Field on June 19, as part of his tour dates with the Eagles.