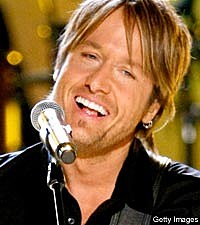 8-yr-old Matthew Pinkham is a YouTube guitar hero, thanks to his own musical hero, Keith Urban. Matthew and his mom attended the country star's recent show in Louisville, Ky., and held up a sign from the second row that read, "I want to play 'Kiss A Girl' with you." When Keith motioned for Matthew to come up onstage, he stepped up and blew the crowd away!

"They were literally mosh-pitting him to get up there!" his mom, Becky, told WAVE3.com. "He walked up there, put his guitar on like it was nothing, like he had been doing it for years!"

Afterwards, when the pint-sized rock god was swamped with requests for pictures, he said, "Mom, I should have brought a hat and sunglasses!"

When fans began posting videos of the collaboration on Youtube, Keith was so impressed that he called Matthew "the bomb" on his own website. The little boy's electric guitar now features an autograph from Keith, along with signatures from Dierks Bentley and others he got at a special event at Vanderbilt Children's Hospital. Matthew spent plenty of time there, due to a bone disease that left him unable to run or play outside with his friends, which is why his mom first encouraged him to take up guitar. Watch Matthew's arena debut here.