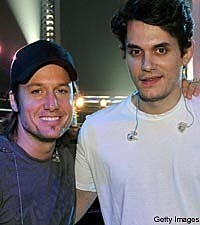 If you caught the performance of 'Hit the Ground Runnin'' with Keith Urban and John Mayer during last week's CMT Music Awards and were wanting more from the two guitar-slingers, then you're in luck. The guys will debut their 'CMT Crossroads' episode on Friday, June 18 at 10:00 PM ET.

During rehearsals and the show, Keith found he could communicate effectively with the pop artist through music, and the two have developed a friendship which has lead to scheduling a few tour dates together later this year. "Doing 'Crossroads' was great. I find a great common ground with John as we play," explains Keith. "We come at it differently, because we have different musical styles that we were influenced by. But I think there's a middle ground somewhere. It all sort of connects somehow. I like the language of guitar players. I like when they speak through playing, and that's why I like collaborating with different people because it's just different conversations."

Keith has also said he feels a great connection with Brad Paisley and Vince Gill, as well, which he describes as "a guitar player thing, really, at the end of the day."

The pair trade vocals and licks on each other's songs including Keith's 'Til Summer Comes Around,' 'Tonight I Wanna Cry' and 'Sweet Thing.' The axe-toting performers also team up on John's hits, 'Perfectly Lonely,' 'Gravity' and 'Say,' in addition to a few other surprises.

This wasn't the first time these guys took part in the 'CMT Crossroads' series. Previously, Keith was paired with rock legend John Fogerty, while John took to the stage with another of country music's greatest guitarists, Brad Paisley.