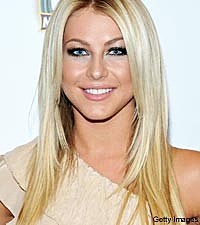 In addition to new music, Julianne Hough is also starring in a pair of upcoming big-screen movies. There have been a few changes going on with her turn as Ariel in 'Footloose,' but with a new director and new script, the film seems to be back on track.

"This has been such an ongoing thing for me," Julianne tells The Boot. "Everybody's read so much about it, and [they're thinking], 'Would they just shoot this movie already?' But I could not be more excited now than before because there has been so much direction and growth through the movie. It was going to be this singing, dancing, big shebang movie, and now it's going to be more like the original and really, really holding all the key points from the movie. It's great for me, because I feel like it's a real performance, acting piece for me. I don't sing or dance in it, so it's going to be really fun and challenging. The director, Craig Brewer, he's unbelievable. He did 'Hustle & Flow' and 'Blacksnake Moan,' so it's going to be edgier, still PG-13, but it's definitely going to be a little edgy."

Brewer took over at the helm of the project after Kenny Ortega left the movie. Shooting on the film is expected to begin this summer, even though the male lead, played in the original by Kevin Bacon, has not been confirmed as of yet. Chace Crawford and Zac Efron both dropped out soon after commiting to the role.

Julianne, who is hitting the airwaves with her new single 'Is That So Wrong,' also has another big-screen movie in the works. "I just finished shooting a film called 'Burlesque,' with Cher and Christina Aguilera, Stanley Tucci and an amazing cast. It was really fun, my first movie role, and it was a great transition -- I got to sing and dance and do all that. I'm definitely different. I hope you can recognize me. I've got red hair and I'm pregnant. [laughs] But it's fun. It's definitely like a 'who's that?' kind of thing."

The singer-songwriter-dancer looks up to Cher and had a few scenes with the woman she affectionately refers to as 'Cher-Bear.' "If anybody deserves the right to be a diva, it's Cher, but she is so far from being a diva it's not even funny. She's so chill and down-to-earth. She's the one sitting on set when everybody's saying, 'Can we go to our trailers?' And she's like, 'No, I'm cool.' But she's really encouraging. I did a great scene, a very emotional scene with her, and she just knew exactly what to say to me to get me emotional after 17 takes. I feel so blessed to even have been in her presence and have worked with her."