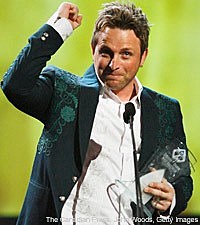 Canadian singer Johnny Reid, who duets with Terri Clark on her new album, 'The Long Way Home,' was the big winner at the Canadian Country Music Awards on Sunday night (Sept. 13). The Scottish-born singer was nominated in five catgeory and took home five trophies, including Male Artist of the Year.

Other winners at the awards show, which took place in Vancouver, BC, include Dean Brody, whose 'Brothers,' earned Single of the Year; Crystal Shawanda, who took home the award for Female Artist of the Year, and Group of the Year winner Doc Walker.

The awards show featured performances by Terri Clark, Reba McEntire and Martina McBride, and was hosted by actor Jason Priestley ('Beverly Hills 90210'). Recapping the night's highlights, the Edmonton Sun reports Reba broke the crowd up when she quipped that she was "so excited to meet Luke Perry."