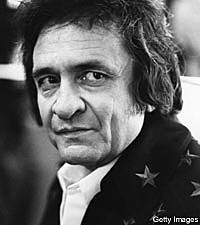 When Johnny Cash sang, "I don't like it but I guess things happen that way," he wasn't referring to music fans downloading songs instead of buying a 45 r.p.m. record (let alone a compact disc!) But time marches on and so does technology. And in just seven short years, Apple's iTunes has logged a staggering 10 billion downloads. And the 10-billionth tune to be downloaded: the Man in Black's 1958 pop-country smash, 'Guess Things Happen That Way.'

On Thursday (Feb. 25), 71-year-old Louie Sulcer, from Woodstock, Ga., received a call from Apple's Steve Jobs, informing him that he'd downloaded the milestone-marking tune, and earned himself $10,000 worth of free music. Jobs also surprised the retired grandfather of nine -- who was given an iPod Nano as a birthday gift last October -- by telling him Johnny's daughter, singer Rosanne Cash, was also on the line. CBS News reports Rosanne told an incredulous Sulcer, "We're so proud that the winning pick was one of my dad's songs."

Of the top 25 downloads at iTunes since the service launched in 2003, only one is a country song. Taylor Swift's 'Love Story' is the service's eighth most downloaded track of all time.