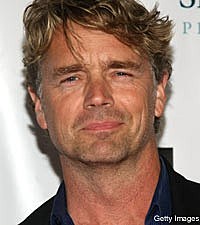 Though he's best known for his role on the hit TV series 'Dukes of Hazzard,' John has also had his share of country music success. He has recorded ten albums and scored several Top 10 hits back in the '80s, including 'It's Now or Never,' 'I've Been Around Enough to Know,' 'At the Sound of the Tone' and 'Country Girls.' But it's been almost two decades since he's released new music, so why the resurgence now? Well, it's all about a piece of advice given to him by Johnny Cash.

That song that struck a chord with the actor/singer is called 'The Promise,' which John explains is a timely song that grabbed his attention and that he believes is the song "that Johnny Cash talked to me about all those years ago."

John actually lived with Johnny and June Cash for a while, when he was just starting his career. In addition to great musical advice, he also credits the couple for strengthening his Christian beliefs.

Filed Under: john schneider, JohnSchneider
Categories: Country News
Comments
Leave A Comment
Tim McGraw Covers John Schneider + Enlists Other Stars to Share Their Favorite Deep Cuts [WATCH]
Christian Kane Trades Jabs — and Verses — With ‘Bo Duke’
38 Years Ago: George Strait Releases ‘Does Fort Worth Ever Cross Your Mind’ Album
48 Years Ago: Waylon Jennings’ ‘I’m a Ramblin’ Man’ Hits No. 1
Jason Isbell and the 400 Unit Announce New 2023 Tour Dates
Morgan Wade to Embark on 2023 No Signs of Slowing Down Tour
Luke Bryan Is Planning to Slow Down His Career for His Boys
‘The Voice': Madison Hughes Stuns With Country Take on a Bob Dylan Hit [Watch]
19 Years Ago: Dierks Bentley Earns First No. 1 Hit With ‘What Was I Thinkin”