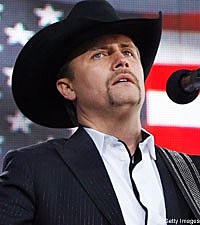 Sometimes it's not the artists or record labels who decide which songs to release as singles -- sometimes it's the fans! Case in point: the brand-new, runaway hit from John Rich, 'Shuttin' Detroit Down.'

Rich wrote 'Detroit' just about two weeks ago, inspired by those who've lost their jobs in today's tough economy. "They're out there losing millions / And it's up to me and you / To come running to the rescue / We'll pardon me if I don't shed a tear / They're selling make believe and we don't buy that here / 'Cause in the real world, they're shutting Detroit down."

"I've been watching the news like everybody else," Rich told Detroit radio station WYCD. "I'm sitting there, getting madder and madder, watching New York and Washington D.C. sling billions of dollars back and forth to each other while the hard-working people in America are just going, 'What in the world is going on up there?'"

Rich was already putting the finishing touches on his upcoming solo album, 'Son of a Preacher Man,' when he wrote 'Shuttin' Detroit Down.' But thanks to his performance of the song on several radio stations this week, he's stopping the presses on the CD so that he can add this song. Fans have simply demanded it, flooding radio stations with hundreds of calls and emails requesting the song.

"This is what country music's all about to me," Rich told New Jersey's K98.5 radio. "Try to say something that matters to you as an artist and a fan of country music -- and if it matters to me, there's a good chance it's gonna matter to a lot of other people."

Rich rushed to the studio this week to record the song, and 'Shuttin' Detroit Down' was officially released as a single on Wednesday. It follows 'Another You,' the first radio hit from 'Son of a Preacher Man,' due in stores in May.