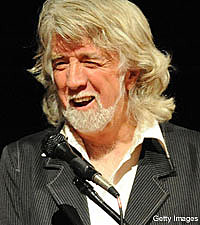 Every musician comes through Nashville to record at least once, and Paul McCartney is no exception. The ace singer/songwriter and member of a fairly well-known British group called the Beatles drifted into town in the early '70s. John McEuen of the Nitty Gritty Dirt Band remembers it well.

"The fact that Paul McCartney was recording in Nashville was known to those in the music biz, but kept fairly quiet to the general public," John tells The Boot. "It was easy to find out, because when the question of 'where's Paul recording' was asked, all the pickers knew -- and had hopes of maybe being called for one the sessions. I didn't have much hope of that, as the words of my brother Bill kept ringing in my ears and were a good assessment of my chances. Bill is purported to have said, 'If the banjo was any good, the Beatles would have used it' right around this time period."

In spite of that, John asked around, found out where Paul was recording, and set out for the studio around 8:30 in the morning. "The anticipation of meeting a Beatle made my heart beat as fast as 'Foggy Mountain Breakdown'," John recalls. "Sitting in the parking lot waiting for his limo to show up calmed me down. He was at a studio I had recorded in before, so it felt more comfortable. At 8:45, he drove up and parked. I had heard he drove himself, but thought that might not be true. It was, and he was alone, going to work.

"In these pre-John Lennon's death days, it was easy to approach him. Walking up to him, I introduced myself and said I was from the Nitty Gritty Dirt Band. 'Oh yes!' Paul replied. 'Spencer Davis gave me your album, 'Uncle Charlie and His Dog Teddy,' a few years ago -- a lovely album ... with the 'Mr. Bojangles' song on it, and the bluegrass music was lovely'."

John remembers that the two of them chatted for about seven or eight minutes, with several opportunities for Paul to exit given but not taken. "It felt like two old friends running in to each other briefly," says John. "This feeling he was able to give another, him one of the biggest stars in the world, was a feeling that you were possibly a long missed neighbor or such, is something I carried with me since then. He listened, and responded to what he was hearing. He was a nice guy."

About 30 years later, John and his wife Marilyn were leaving a Hollywood showing of 'Ray,' the Oscar-winning film about the life of Ray Charles. As they left the theater, John turned around to speak to Marilyn and instead, found himself face to face with Paul. "The first words out of my mouth were 'Oh, hello again, Paul.'

"His polite reply of 'Hello, lovely movie, did you like it?' made me feel like the 30 years between seeing him had been 30 days. We started talking, I told him about our previous encounter, amused him with recounting about how often I had thought of it as an example of how one should handle celebrity. He introduced us to his wife, talked about the film, music, and a few chatting things from Nashville to Los Angeles, and cordially bid adieu.

"I forgot to ask him if the Beatles had ever used a banjo."

The Beatles on AOL Music