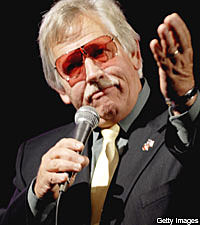 Grand Ole Opry star John Conlee has raised more than $235,000 for the Feed the Children foundation -- one dollar at a time.

At one of his performances a few years ago, the singer, whose hits include 'Rose Colored Glasses' and 'Friday Night Blues,' launched into his rendition of the Harlan Howard-penned classic, 'Busted,' a Top 10 hit for him in 1982, only to be taken by surprise when fans came forward to throw dollar bills on the stage.

"We were doing a show in California -- a fair," John tells The Boot, "and during that performance that night, people started bringing money to me at the stage as a joke because I'm singing about being broke/ And they just kept coming! We ended up that first night with $57. We held on to it for a while, thought of Feed The Children, sent it to them, and we've kept the campaign going at all of our shows in the meantime."

John has added a new twist to the fund-raising effort. Starting in 2008, half of the money that goes in the bucket goes to Feed the Children, while the other half is sent to benefit the country's servicemen and women. "We send money to several different wounded warrior projects, and organizations that help the wounded," explains John. "When we do 'Busted' live, that's the cue for people to start bringing their money. We've done it for so long now that there's at least a handful of people in any crowd who know what's going on, and they start bringing dollars up. Of course there's a lot of people who don't know what's going on either, so when I get to the end of the song, we explain what it's all about."

John has also been a part of nine Farm Aid concerts, helping to raise more than $13 million for America's family farmers.

'Busted' has been recorded by dozens of other artists, including Ray Charles and Johnny Cash.