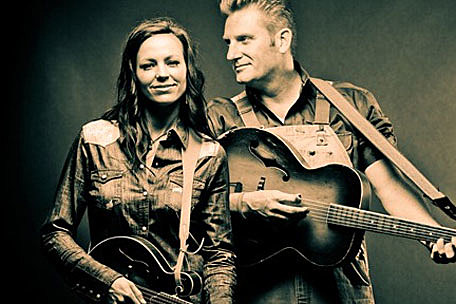 With a new TV show and a new album, His and Hers, releasing Tuesday (July 31), life has certainly been busy for Joey + Rory, but the talented husband/wife duo have actually spent much of this year streamlining and refocusing their hectic lives.

"The first of this year we committed to not travel as much," says Joey, who has been married to husband Rory Lee Feek for a decade. "We've been doing this for four years and we've been out doing tons of radio tours, played a lot of shows, festivals, fairs and events. We've done it all. We've said 'yes' to everything in the beginning, because we really wanted to know what it was all like. We wanted to put our best foot forward and try our hardest to really make a go in this music career, so after four years of doing it we found that we know what we like to do and we know what we don't enjoy doing."

What they enjoy most is making music and spending time at their farm in Pottsville, Tenn. With the launch of "The Joey + Rory Show" on RFD-TV, the couple is enjoying the best of all possible worlds. "We converted the barn at our farmhouse into a fully working sound stage and we just started filming everything right there," Rory says of the show, which airs Friday nights. "From the beginning since people heard us sing together they would say, 'You need a variety show.' I always thought it was always impossible because they are so expensive to make, and then we figured out because we've been making our own music videos for a while, we have a team of people around us who are great friends and good collaborators. We just decided we can do this on our own."

The show marks a return to TV for the couple who got their start on CMT's "Can You Duet?" series in 2008, placing third in the competition. They've already filmed 13 episodes of their new RFD show, which spotlights their rural lifestyle and showcases their music. "It's been a neat journey," Rory says of launching the TV series. "This is really a vehicle that we have a chance to get out there and for people to hear our music and to discover other artists that we want people to be exposed to on our show, too, and to do the whole thing at home with old friends, never leave our house and grow an audience -- that's really what the hope is."

Rory admits the competition is increasingly tough when it comes to getting on radio, especially for artists on an independent label. "The main thing is trying to find an avenue or venue to share your music and your story with people in a way that could actually happen, and at radio it's a difficult thing," Rory tells The Boot. "We're still hopeful, but we want to do something that we know we can do. This way we can be ourselves and be authentic. We can work with friends and create something that people haven't created in a long time, like an old time variety show. Those just aren't around very much anymore and it's on a network with an audience that is starving for that kind of thing. We can do it all ourselves, and walk across our driveway at our farmhouse and do it right there. So that's what the goal is: just try to be ourselves and do what we do and grow an audience without ever leaving home."

The show features a look at Joey and Rory's farm life as well as showcasing other artists and sharing recipes from Mary Jo's Mealhouse, the restaurant Joey launched in 2007 with Rory's younger sister Marcy. And of course, the new TV venture showcases the couple's music, including songs from their third album, His and Hers on Vanguard/Sugar Hill Records.

The couple has succeeded in crafting a collection of extremely moving songs that pack an emotional punch. The first single is a prime example. "When I'm Gone" features a stellar performance from Joey on the sensitive ballad that finds a wife telling her husband "You'll be ok when I'm gone."

"I was devastated, absolutely devastated when I heard it and what it meant and coming from the person who is leaving their loved one," says Joey. "That concept was just something that I had never heard or thought of before and it really struck me."

The song was written by Joey's friend Sandy Lawrence. "It came from one of my dearest friends who never had a cut," Joey says. "She wrote that song by herself and she wrote it about her mother who was dying. She was watching her mother pass, and she was so badly needing her mother to tell her those words. She needed affirmation that everything was going to be okay after her mom died and she wasn't able to get it from her, but she wanted to write this to leave to her son and to her husband and to let them know that if anything were to ever happen, everything is going to be okay when I'm gone. It just knocked me out. When we recorded it, it was just magical. She came in while we were recording it in the studio and then I had her sing the harmony vocals on it with Rory and then when we shot the music video, it just seemed so fitting that she played the piano."

In recording His and Hers, Joey and Rory took a different approach than their previous albums. "On the first two records, I did almost all the singing," says Joey. "On our live shows, it's shared. He does 50% of the singing and I do 50%, so on this album he does six songs and I do six."

One of Rory's favorite songs on the new record is the opening tune, "Josephine," which was inspired by letters written by a Civil War soldier. "When we bought our farm house in 1999, I joined the historic society in our community," Rory says, "and one of the things I got to read were letters J.W. Robinson had written to his wife, Josephine."

Rory was extremely moved by the raw emotion in the letters. "He was missing his wife," Rory says. "The grammar was terrible and his spelling was terrible, but the way that he spoke to his wife and the way that he talked was so much more beautiful than any of it today. He always ended every letter with something like, 'your loving husband while I remain among the living.' I just started writing and the whole song happened. A lot of it was straight out of the letters ... As the story went on and he ended up saying, 'If I get killed, don't grieve me too long. Marry someone else and don't let him treat our baby bad. When you are making love to him, think of me' and it just killed me. It still kills me today. So when Joey wanted to record that on the album, I was thrilled to put a song like that on our record with hopes that people might hear it."

Rory says they have plans to shoot a video of the song and he looks forward to bringing the story to the screen. "We want to do it around a reenactment and really around some authentic stuff," he says. Another of the album's highlights is "Your Man Loves You Honey," a cover of the Tom T. Hall classic. "We always try to do a cover song on each album and when he started singing this song I said, 'Gosh that sounds like a Tom T Hall song!' and he said, 'Well it is.' I love it and Rory nailed it," Joey says proudly. "I think the only thing that was a little hard for him to sing was the line about the old Army sweater because Rory spent eight years in the Marines."

"Teaching Me How to Love You" is a song that Rory had written years ago. "When I sing that song out live, I always start that song by saying, 'This is a song that I wrote for my wife. I sang it for a few girlfriends before I met my wife, but I wrote this for my wife and it really is a true story,'" says Rory. "We all go through things and whether they've been hurtful or hard or whatever they were, they are all leading us to where we are and they are important parts of our journey to get to where we are."

In talking to Joey+Rory, it's obvious they are two people in love with each other and in love with music, and they are enjoying the journey. "A friend of ours told us he looked at our lives -- we live on a farm. We have a restaurant. We sing. We write a lot of the songs that we sing and we look a particular way. He describes it as 'You guys are living life on purpose,' and that's true. We are taking our own path and it does all seem to be adding up."