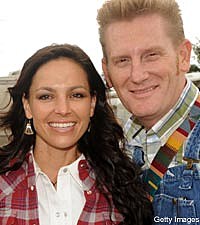 It's beginning to look a lot like Christmas. At least to Joey + Rory. The duo, best known for their hit 'Cheater, Cheater,' are headed to Key West this summer to record a holiday album and Rory couldn't be happier about getting in the holiday spirit a little early.

"Christmas is Rory's most favorite holiday," Joey tells The Boot. "He starts getting ready for it in October, setting up the tree and everything."

The collection will include 'It's Christmas Time,' which the pair released last year, as well as originals penned by Rory. Though Joey says, "For us, it's more about the faith than anything."

Rory adds that the album will also include secular holiday tunes. "For the most part, it will be a couple of classics and the new songs. If they're about faith, they're still sort of secular songs. They just talk about what's important to us."

After the couple finishes recording their holiday treat, they head back out on the road with their spring touring partners, the Zac Brown Band, for August and September. "They are the best band in country music," declares Rory. "They're the best with their fans. Everything about them is different than anything we've seen before. They have the biggest hearts."

As happy as Joey + Rory are with the Zac Brown Band, they have a few other dream bills on their wish list: Are you listening, Alan Jackson, the Judds and George Strait?

Categories: Country News
Comments
Leave A Comment
31 Years Ago: Garth Brooks Sets a ‘Billboard’ Chart Record With ‘Ropin’ the Wind’
38 Years Ago: George Strait Releases ‘Does Fort Worth Ever Cross Your Mind’ Album
48 Years Ago: Waylon Jennings’ ‘I’m a Ramblin’ Man’ Hits No. 1
Jason Isbell and the 400 Unit Announce New 2023 Tour Dates
Morgan Wade to Embark on 2023 No Signs of Slowing Down Tour
Luke Bryan Is Planning to Slow Down His Career for His Boys
‘The Voice': Madison Hughes Stuns With Country Take on a Bob Dylan Hit [Watch]
19 Years Ago: Dierks Bentley Earns First No. 1 Hit With ‘What Was I Thinkin”
‘The Voice': Married Country Duo the Dryes Pull Off Unforgettable ‘Islands in the Stream’ Cover