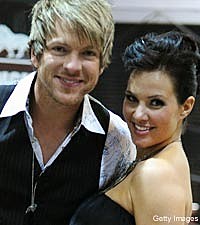 Rascal Flatts guitarist Joe Don Rooney may be a few dollars richer today. It seems he won a bet with his pregnant wife, Tiffany Fallon. Just like he predicted, they are having a girl!

"I had in my head that we were having two boys," Tiffany -- already mom to 23-month-old son, Jagger Donovan -- tells PEOPLE. "I think Joe Don was really hoping for a girl, and he got his wish! He said to me, 'That marks the first time I've ever been right.' So I'll have to give him credit for that one."

Tiffany, who is due in September, says finding out the sex of the baby was a must. She explains that knowing the gender makes it's easier to "wrap your head around the pregnancy," and, of course, easier to decorate the nursery!

If only explaining the new addition to Jagger were as simple. "He knows a baby is on the way but he's really just interested in picking his nose and riding on top of the dog," Tiffany jokes of her son.

There's no word yet on what Jagger's little sister's name will be. Tiffany says that will be a mutual decision that may take a while.

Tiffany and Joe Don just recently celebrated their fourth wedding anniversary, and they couldn't think of a better gift than a second child. "Having our anniversary, it really puts it all into perspective. We really have the whole package," says Tiffany. "We don't need a lot of fancy stuff, we just need to celebrate each other and our growing family."