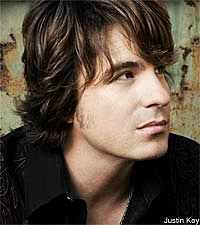 As a child who spent time in and out of foster homes, Jimmy Wayne knows firsthand what it's like to spend Christmas without some of the things other kids can take for granted -- like enjoying home-cooked meals or opening countless gifts. But thanks to charity foundations like the Salvation Army's Angel Tree Program, less fortunate children have a chance to experience a Christmas to remember.

"I was a recipient of the Angel Tree Program when I was a kid," Jimmy tells The Boot. "My sister and I both were. Sometimes we'd get picked and sometimes we wouldn't. It was pretty tough seeing other kids in the neighborhood with new bikes and clothes, and [we had to go] back to school wearing the same clothes that we wore last year. It was ... tough times."

But not every year was as difficult. Jimmy was the recipient of a memorable gift through the Angel Tree program one particular Christmas. "I remember getting a deck of UNO cards. Man, we thought that was a big deal!"

Several years down the road, after he moved to Music City and landed a record deal, Jimmy was doing some Christmas shopping and felt a familiar sadness tugging at his heart. "I was at the Green Hills Mall in Nashville right before my first album was released. I was standing there looking over the tier down at this angel tree, just kind of reminiscing of times when I was a kid and those Christmases. I remember how it felt. Although you're used to not getting anything -- or much -- it still hurts. I just started thinking, 'What's going to happen to those kids? The same thing that happened to us, probably.'"

Jimmy was inspired to write a song to bring awareness to the angel tree program. 'Paper Angels,' featured on his debut album, was released as its third single. The song went on to win the prestigious William Booth Award in 2005, given by the Salvation Army in recognition of Jimmy's charity work for the program.

"That wasn't me," he says humbly of the honor, "It was the song, and it was the people behind the song -- the fans out there and the public who got involved and started helping out all these kids. That's who got the award, really. The song was an instrument to motivate people and create some momentum and awareness. It worked. It's been played every year since then, just reminding folks that it's important for us to get involved and help out these kids. Because they've been told their whole life if they're good, they're going to get something; and if they're not, they're not. That's just what we've taught them to believe. If they don't get something, how are we going to expect them not to think, 'Well was it because I was a bad kid?' That's what I'd probably think."

Jimmy also notes that some say it's not what you give or receive, it's the thought that counts, but "it's not that way to a kid. Kids don't think like we think. You'd be surprised what a pair of shoes will do for a kid's self-esteem. Wearing the same shoes to school two years in a row is not fun. You get a new pair of shoes or a new shirt ... watch how fast those grades go up!"

Even in these tough economic times, Jimmy is once again encouraging people to get involved in the Angel Tree program, with a special challenge. "What if we all got together as adults and forfeited gifts to one another and say, 'My gift to you is going to be to sponsor a kid, and your gift to me is that you're going to sponsor a kid.' That's what I've asked everyone to do instead of getting me anything. Take that money and go get a kid something for Christmas. We don't need stuff like they do. They can't physically go get a job and make money to take care of themselves. They depend on us."

Jimmy is so involved in the program that he admits to sometimes getting aggravated when he does receive a gift during the holidays -- or even for his birthday. "I'm not an unthankful person; I'm a thinkful person. When I get a gift, I appreciate it, but there's a kid who needs it more than me. Everybody who I've met along the way who knows me has started giving their gifts to me to the kids. They don't even ask me [what I want] anymore!"

For more information on the Angel Tree Program or to get involved with sponsoring a child this Christmas, visit the Salvation Army's website.