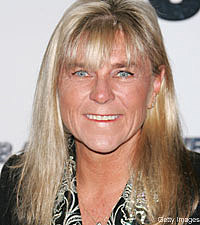 Jett Williams, daughter of the legendary Hank Williams, has been named official national spokesperson for the Oprhan Foundation of America, the nation's oldest organization focusing on education, mentoring and workforce development for youth no longer able to be in the foster care system because of age.

As spokesperson, Williams will raise public awareness of OFA's mission and programs for foster youth through a variety of speaking engagements, public service announcements and special events.

Born in Alabama just five days after her father's death, Jett was adopted by Hank Williams' mother, Lillian Stone, but when her grandmother died within weeks of completing the adoption, Jett was no longer wanted by the family. She became a ward of the state, and after a series of foster care placements, was adopted and raised by Wayne and Louise Deupree. Williams did not discover the identity of her real father until she was 30 years old.

"I am honored to join forces with OFA in the education and mentoring of orphans and foster youth," Williams said in a statement. "As someone who was twice adopted and a product of years in several foster homes, I believe this association is a marriage made in heaven. Together we can enhance OFA's fine efforts to make quality education and support available to deserving children who might otherwise be left behind, through no fault of their own."