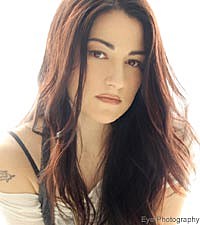 Jennifer Knapp is back after a seven-year hiatus with a country-flavored album, 'Letting Go.'

While Jennifer made her name as a Christian singer/songwriter -- winning a Dove Award along the way -- her new music is arguably more country/folk/pop influenced, drawing from some of her favorite artists ranging from Shawn Colvin to Lucinda Williams and Anita Baker. The results are richly textured, emotive songs about life lessons, spirituality and inner conflicts.

"Now that the record is recorded I can sit back and listen to it," Jennifer tells The Boot. "The songs were in my mind and I didn't even know if I could write them. That's how much distance was between my music and me ... I'm really proud and excited about this record.

"I've always had many fans that aren't necessarily Christian music fans," Jennifer continues. "My faith is in this record but in some ways I've got outside of that music [format]."

Nashville-based Paul Moak, whose credits include work with Amy Grant and Mat Kearney, produced 'Letting Go,' which will be released May 11.

At one of Jennifer's first tour dates on March 8 in Alexandria, Va., the audience cheered long and loud as singer-songwriter Amy Courts and co-headliner Derek Webb shared stories about Jennifer's music.

"I've been a fan of Jen's since I was 15," said Amy, explaining that Jennifer's music inspired her to write and move to Nashville. "When I got there and found out she had left, I was pissed!"

In fact, Jennifer had left the music business against the strong advice of industry insiders who believed a long absence would unravel both her credibility and her loyal fan base. Although she acknowledged the risk, the singer said she had no choice but to leave Nashville and head to the outbacks of Australia.

"I had to do it because I knew if I didn't I might never play music again," Jennifer explains. "I had to release myself from the pressure to perform or the pressure to be the artist that helps a record company survive."

After not playing music or singing for years, Jennifer began to slowly edge her way back until she was sharing new songs with friends.

"I went back to my first days of songwriting, with friends asking me, 'Have you written a new song lately? Can I hear it?' I began to love it again and was excited to get back to performing and recording."

If the crowd at the Alexandria concert is any indication, Jennifer's still strong and enthusiastic fan base has already welcomed her back.

A few songs into her set -- after she told a story about her "redneck uncles," sipped Scotch and told the crowd to be patient with her as she comically took deep breaths between songs -- the shouts, laughter and applause from the audience made it clear Jennifer had again won them over.

"This is the most genuine music I've put out since I started recording," Jennifer says. "Isn't that exciting?"