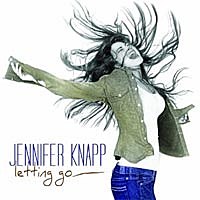 At least that's what she jokes now that her first new album in almost a decade -- 'Letting Go' – is set to be released May 11. The project signifies a major relaunch of her musical, professional and personal lives. Although Jennifer made her name as a Christian singer, her new album is arguably much more alt-country, certainly than what she has recorded before.

"To me, I have made a quintessential indie record," Jennifer tells The Boot. "The result is coming out of confusion that I had. Once I could move away from art as commerce, it allowed me to really hold onto things and rediscover what is beautiful, where I am, and why I am here."

Against the advice of her managers, Jennifer exited the music scene after building a solid fan base and earning two coveted Dove Awards and a Grammy Award nomination. Years living a bohemian lifestyle in Australia helped the singer reconnect to her music and personal life. In addition to her tour and new album, Jennifer has recently announced she's a lesbian and in a committed relationship.

"I had done some kind of music my entire life and then for years I didn't sing, didn't write, didn't touch my guitar," Jennifer says. "That was the longest period I had gone without making music since I was five years old. After a year of writing again, I started to think it was really fun; I started to get really excited to have my friends hear my new music."

Perhaps not surprisingly, the new songs are richly textured, emotive tunes about life lessons, spirituality and inner conflicts. With Jennifer's smoky vocals and pounding guitar work out front, it's difficult not to hear more than hints of Gretchen Wilson, Bonnie Raitt and Trisha Yearwood in her style.

Although it's not an album that falls into the Christian format, Jennifer says her faith is clearly evident in the songs.

Of course, Jennifer is concerned that her sexuality may well put her on the blacklists of many music fans. No other singer of Jennifer's renown in the Christian music genre has been openly gay.

Even in country music, those that have not led traditional lives – including Amy Grant when she filed for divorce almost a decade ago and married Vince Gill – have faced professional retribution. And coincidentally, country singer Chely Wright also came out publicly last week. Although the price of honesty may be high, Jennifer says her goal is to remain honest in her personal life.

"I'm getting my big girl pants on, getting back to my life," says Jennifer. "I have no idea if I'll be able to keep that balance at this point. If I have ever prayed for anything it's now when I pray let my music be judged as music."