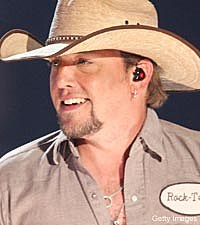 In concert, Jason Aldean is one wild and rockin' cowboy the minute he hits the stage. What fans might not realize is that when he's not performing, Jason is just a good ol' Georgia boy who enjoys a low-key life.

"I think the people would be quite surprised [to see me] off stage when I'm at home," Jason tells The Boot with a grin. "I'm pretty quiet and laid back. I think that it's a completely different mindset for me, being on stage. Up there, I'm there to entertain and put on a show. I come off stage, and I'm at home or whatever, I'm pretty quiet and laid back. I'm not as obnoxious as I am on stage!"

Jason and his road band -- Kurt Allison, Tully Kennedy and Rich Redmond -- are currently off the road for the remainder of 2009. They're spending time in the studio, beginning to lay the ground work for Jason's fourth studio album on Broken Bow Records. Fans can likely expect that album to be released next year.

Jason revealed more of his wild, "obnoxious" side earlier this year with the release of his concert DVD, 'Wide Open Live and More'