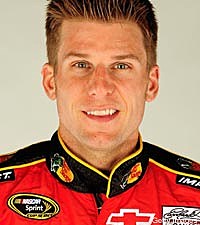 NASCAR driver Jamie McMurray's pulse must have been on overdrive when he sped past the checkered flag, holding off Dale Earnhardt Jr. to win the 52nd Daytona 500 last Sunday. After taking the victory, NASCAR.com reports that Jamie screamed, "Oh, my God! I can't freaking believe it right now. Thank you so much. I can't believe we just won the Daytona 500!"

We'd like to think he celebrated by listening to a little country music. The 33-year-old, who grew up in the Midwest, counts country as one of his favorite genres. When he's not on the racetrack, he listens to artists such as Shenandoah and Dierks Bentley. "I like the country songs that tell a story," Jamie says. "Most of them do. That's what so great about it, you can easily relate to it. No matter what it's about, you can put yourself in that situation."

Jamie says the first country song he remembers hearing was Garth Brooks' 'Unanswered Prayers.' "I heard it in eighth grade. A guy had a Walkman -- that was a long time ago -- I just remember hearing that song, and [thinking] 'that's country?' Because when you thought of country you thought about Johnny Cash or Merle Haggard. I heard that song, and I was hooked from there."

When he's off the track and just driving around town, Jamie admits he does sing along to country music, but says his singing talent doesn't equal his talent behind the wheel. "I'm terrible. I'm definitely a guy who's a bad enough singer that if I sing a little bit, people tell me I should stop singing."

With the opportunity to have met a few country artists, including Sara Evans, Josh Turner and Jo Dee Messina, Jamie notes, "The cool thing part about them is that they're somewhat like the cup drivers ... the NASCAR drivers ... they're just normal. Sometimes you meet people that are a little bit famous, and they're a little bit arrogant, and you meet a huge country singer or a NASCAR driver, and they're just pretty normal."

Appropriately enough, two of Jamie's favorite country songs are 'Long Way Home' by Dierks Bentley and Rodney Atkins' 'Watching You.' And one thing's for sure, Jamie had to be happy that his prayers on Sunday didn't go unanswered.