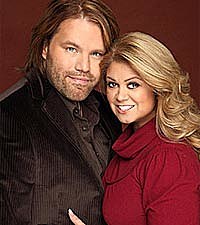 James Otto made it home just in time to welcome his first child with wife, Amy. "Ava Katherine Otto has made her arrival!" James tweeted Tuesday, August 24, after his little girl's 9:23 PM CT birth. "She is beautiful & healthy & the most amazing thing I've ever seen."

"She is beautiful like her Mama and I am already wrapped around her tiny finger," the proud dad reports. "I am so grateful I made it home in time to be here for her arrival -- it has truly already changed our lives."

Leading up to Ava's birth, James had been on the road with Toby Keith and Trace Adkins, opening the American Ride tour. "Last two shows of the American ride tour are today & tomorrow," James told his Twitter fans over the weekend. "I've had a blast hangin with the big boys & hate to see it end. But I'll bet seeing my baby being born is probably gonna rock my world even more! I'm excited to be a dad y'all!"

James found out that he was going to be a daddy late last year upon returning home from the road. "I got back in, and [Amy] was standing in our house with balloons and a ribbon around her, and I thought, 'Well, this is exciting. I'm coming home and maybe she's just excited for me to be home.'" James tells The Boot. "I was trying to think -- did I miss some kind of occasion? Then I realized they were pink and blue balloons, and they had rattles wrapped around them. So she made a real special event out of it. She had really gone out of her way ... It was a thrilling moment."

From the moment James and Amy found out they were expecting a little girl, the name Ava just seemed to fit perfectly. "We chose Ava within about ten minutes of knowing the baby was going to be a girl," James says. "We just [thought it] sounds right. Plus, Ava and Otto are both a palindrome -- you can spell them both backwards and forwards."

Congrats also go out to Rascal Flatts' Jay DeMarcus, who has become an uncle by Ava's birth. James' wife, Amy, and Jay's wife, Allison, are sisters. Jay and Allison are expecting their own baby, a girl, in January.

Ava Katherine Otto weighed in at 8 pounds, 2 ounces and measured 19.5 inches long. Both Mom and baby are said to be happy and healthy!