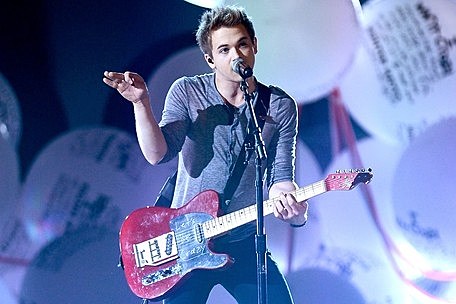 Fast-rising young country star Hunter Hayes is about to make the jump to headliner status. The 21-year-old singer-songwriter and multi-instrumentalist has announced the dates for a fall tour that will be sponsored by CMT. The CMT on Tour: Hunter Hayes Let's Be Crazy Tour will kick off in Knoxville, Tenn. on Oct. 10 and run through Dec. 7 before wrapping up in Kansas City, Mo.

"The fall is going to be a production, a show, an experience based on years of my dreaming about it," Hayes tells USA Today. "It's kind of like my first record - you have your entire life to make your first record, I've had my entire life to plan for this tour."

Hayes has been on the road opening for some major acts, including Carrie Underwood's just-wrapped Blown Away Tour. "This is my first chance to look at a stage and go, 'What do I want to do?' as opposed to 'What can we do?'" he observes. "I've got truck space, I've got a crew that can really put on a show, we've got a band that is more than capable."

Pistol Annies singer Ashley Monroe will serve as the opening act for most of the dates. She'll be supporting her critically-acclaimed solo album 'Like a Rose,' and she also recently contributed her voice to a new recording of 'What You Gonna Do' from Hayes' debut album. The track is slated for release on 'Encore,' an expanded edition of the first record that's due June 18.

Tickets for the fall tour go on sale June 14 and 21. Fans who pre-order 'Encore' or download Hayes' new mobile app will have early access to tickets.