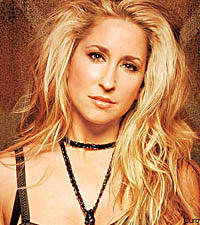 Heidi Newfield had an unexpected, but welcome, early morning wakeup call on Wednesday. Her manager phoned to tell her to turn on the CBS 'Early Morning Show.' So, the former Trick Pony singer dragged herself out of bed to watch as the ACM nominations were revealed on live TV.

"My husband and I watched the nominations with teary eyes and total elation," Newfield said of hearing her name called five times. "The support and excitement for me and this record has really blown me away, and I'm so proud for all the wonderful people who've been involved in it ... This is one of the happiest days of my life!"

Newfield has the most ACM nominations of any female artist this year. While she is thrilled with the recognition, she admits that there is one other thing that would make that night even more special.

"In all my time doing this, I've never had the chance to perform on a major awards show," she told Nashville's Tennessean newspaper. "That's including Trick Pony having won a best new artist award at the American Music Awards in 2001, and a best new group award at the ACMs in 2002. I've always thought of that as a big mile marker, having an opportunity to get up onstage and throw down and show people what I can do."

With nominations that include Top Female Vocalist and Song of the Year, this could be the year Newfield gets the chance to grace the ACM stage.