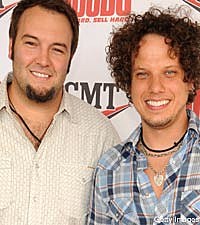 Halfway to Hazard, the country duo comprised of singer-songwriters David Tolliver and Chad Warrix, have revealed on their official websitethat they are no longer going to be touring or recording together.In a letter to fans, David writes: "I want to first thank you guys for all your support and love over these past few years, you guys are awesome!!! It has been a wild ride so far and we have made so many great friends and memories but at this time in my life I have to take a step back and deal with some personal and family issues that I have neglected to address until now. I am gonna take a break from Halfway to Hazard and put my energy into making myself a better man, father and husband! I will miss you guys but it will only be for a short time, after that we'll see how this life is gonna go! God bless you all, I love each and everyone of you like family!!! Thanks for everything."

In 2007, the year they released their self-titled debut album, the duo opened shows on Tim McGraw and Faith Hill's Soul2Soul2 tour. Their second album, 'Come on Time,' was released last October.

In August 2009, Tim, Dierks Bentley, James Otto and Randy Houser were among the celebrities participating in the duo's second annual Charity Trail ATV and dirt-bike ride in Crockettsville, Ky.