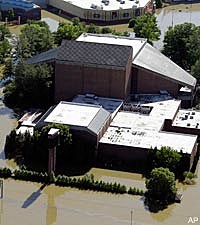 The circle is indeed unbroken.

Submerged under two feet of water, country music's most famous circle -- the six-foot circle of wood on the Grand Ole Opry stage -- has miraculously survived the Nashville flood, even though the rest of the water-logged stage will likely be trashed.

"We were elated," Steve Buchanan, president of the Grand Ole Opry tells the Tennessean. "It is in remarkably good condition. We've taken it up and are taking it out for some TLC, so it will be fine. We have it sequestered for special attention and then it will be back in place. We will ultimately need to replace the stage, but we do that every few years. But the circle will be saved ... and it will be center stage when we open back up."

Cut from the stage of the historic Ryman Auditorium and inserted into the Grand Ole Opry House in 1974, that circle of oak has been stood on and sang on by country legends from Hank Williams and Johnny Cash to today's Opry regulars, including Vince Gill and Brad Paisley. Even Elvis Presley once stood and sang on it in 1954 ... followed by countless singers awestruck by the legacy of that circle of wood beneath their feet.

"Standing center stage in the six foot circle of wood cut from the stage of the Ryman is something I never take for granted," says Blake Shelton. "The history and legacy of that circle is awe-inspiring."

The history and legacy of the rest of the Opry House -- namely, backstage hallways that were flooded and are still coated with noxious filth and mud -- may not fare so well. Last Thursday, workers began wading through the rubble and removing items from flooded lockers that held rhinestone stage wear and vintage guitars.

"It's a profound loss," says Opry member Marty Stuart. "The good news is that the House can be replaced. But there were treasures in there, and some of them cannot be replaced. In my dressing room, there was a tapestry on the wall that was made from what was to be Porter Wagoner's last suit. It was made for him and he died before he could wear it. I don't know if that tapestry made it through or not.

"There was also a lot of stuff at the Grand Ole Opry Museum, Marty continues, "there's the Roy Acuff instrument collection, Marty Robbins' costumes and other things. It's hard for me to wrap my head around all of it."

Although repairs have already begun, it will be months before the doors to the Opry House will be reopened. However, the show will go on in other venues in the meantime, until the Opry is repaired and reopened.

"The show does go on and we are going to fix up our house and move back in," says Buchanan. "This is a building we have a loving and emotional attachment to. There've been moments of significant emotion every day. It's hard for everyone here, because they care so much. The people that work here consider this to be a very special place. We will not feel a sense of relief until we have completed this entire process, until we have gone through and hopefully been able to restore or rebuild."

The Grand Ole Opry House is expected to reopen well before the Opryland Hotel. Both will be open for business by the end of the year.

Help Tennessee Flood Victims
Categories: Country News
Comments
Leave A Comment
Back To Top
Jimmie Allen Is Ready for His 'Dancing With the Stars' Debut