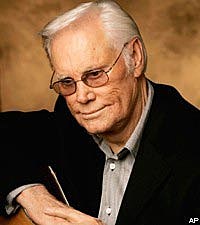 When you think of George Jones, several things come to mind: classic country hit maker, multiple industry award winner, ex-husband of the late Tammy Wynette, and, of course, those nicknames: 'The Possum' and 'No Show Jones.'

"When you're called 'The Possum' ... it stays with me. There's no way I can ever live it down," George tells The Boot with a laugh. "T. Tommy Cutrer was a disc jockey. Everybody loved him. He was one of the old-timers on the all-night shows along with Ralph Emery, and those two got started calling me 'The Possum.'

"I had an album out with a side view of me with a crew cut. I was very young, and my nose looked more turned up, and I've got little beady eyes so I guess I did look like a possum! So they both laid into me and called me 'Possum,' and it got everywhere. There was no way I could stop that, so (I thought) I'll just have to live with that!"

'No Show Jones' was a nickname that also stuck with George for many years, due to his failure to show up to many of his concerts. The country icon has admitted that drugs became a bad habit that he let overshadow his career.

"I think about the dates that I missed, and I'll see those mamas and daddies and some grandkids walking down the old country dirt road ... walking to town maybe a mile, and they've been saving their money for a couple months just to get there and to be let down ... I guess that hurts me worse than anything else," George laments. "'No Show Jones' -- I never did like that, but I played around with it with a song ... made peace with it. I didn't think I'd ever live it down, but it's gotten so much better. [laughs] Nobody calls me 'No Show' any more."

'No Show Jones' Lyrics
Categories: Legends
Comments
Leave A Comment
Back To Top