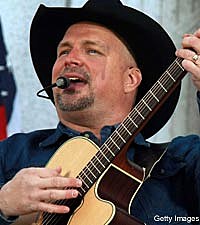 In December 2009, Garth Brooks famously came out of retirement to launch a five-year series of weekend concerts at the Wynn Las Vegas ... because he could fit those shows around the weekly school schedules of his daughters, and because he is a consummate entertainer who loves what he does. Garth also loves to give of himself and support charities that are close to his heart. So, this summer, he will be spreading his legendary musical wings to soar with a symphony orchestra.

On Aug. 1, Garth will perform a benefit concert with the Sun Valley Summer Symphony in Sun Valley, Idaho. He'll also play a solo show -- just Garth and his guitar -- in the symphony's only fundraising event of the year, which supports the free symphony concerts and the symphony's education programs.

The connection between Garth and the symphony was made possible by hotelier Steve Wynn -- the man who was able to lure Garth out of retirement for his Vegas gigs, and who also happens to be a Sun Valley resident and generous supporter of the Sun Valley Pavilion, where the Aug. 1 benefit concert will be held.

"We didn't seek a country music star ... it's been a group effort to have Garth Brooks play at our benefit," says Sun Valley Summer Symphony Executive Director, Jennifer Teisinger. "Steve Wynn has been very supportive, and we are putting this show together with Garth. It is a collaborative effort."

In 2007, Garth became the first artist to release two editions of his latest album simultaneously to help benefit a charity. His 'pink edition' of 'The Ultimate Hits' was released specifically to raise money for Susan G. Komen for the Cure, a global effort to raise funds to fight breast cancer.

Ticket information for the Sun Valley Summer Symphony benefit concert will be available at svsummersymphony.org and sunvalley.com in June.

Filed Under: Garth Brooks
Categories: Concert News
Comments
Leave A Comment
Back To Top
Meet The Boot's 2021 Artists to Watch