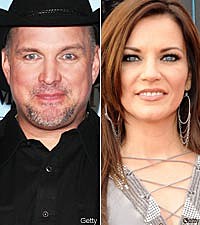 Garth Brooks was honored last week with the prestigious Dale Franklin Leadership Award at a special ceremony in Nashville. And while the evening was meant to pay homage to Garth and his colossal contribution to music, he used the time to acknowledge several other people, including old friend (and employee!), Martina McBride.

Garth met Martina through her husband, John McBride, while he was working the sound board for Garth at a state fair. The country superstar jokes that one of the first conversations he had with John included "the worst thing anyone can hear in the music business: 'You know, my wife's a singer.'" (via CMT). But Garth wasn't put off -- in fact, he was already impressed with how the petite Martina could handle lifting equipment while selling T-shirts for him on the road. Garth told John that if his wife scored a record deal, he would let her open for him on his tour ... even though he'd never heard her sing a note!

"I was scared to death what was going to happen when she opened her mouth," Garth recalls. But after hearing the angelic-voiced beauty sing, he said to himself, "Yeah, I'm a genius!"

Also on hand to celebrate Garth's award were fellow singers John Conlee, Kathy Mattea, Cowboy Jack Clements, Hal Ketchum, Steve Wariner, Lee Greenwood and Garth's wife, Trisha Yearwood, who took the mic to sing his praises. She told the audience a cute story about meeting Garth more than 20 years ago at a demo session, where Trisha jokingly recalled she was paid and Garth was not. She admits she could not have predicted his mammoth success. "I had no idea that he would become Garth Brooks," she said. Happily married for almost four years, she said her husband's appeal includes his "good sense of humor [and] great love of music." She also gushed that he is "one of the nicest guys you'll ever meet. He's way nicer than me!"

Filed Under: Garth Brooks
Categories: Country News
Comments
Leave A Comment
Back To Top
Devin Dawson Finds Freedom From His Own Expectations on New EP