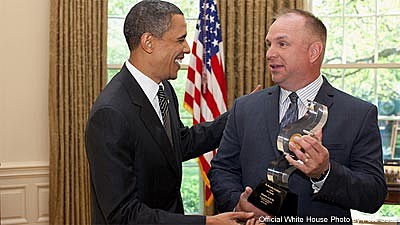 He already has almost every music award that exists, including two Grammy Awards and a Golden Globe, but now Garth Brooks can add a new trophy to his shelf -- from President Obama!

The current Las Vegas headliner recently received the Grammy on the Hill Award in recognition of his tireless efforts in advancing the rights of music makers, from the Commander-in-Chief.

The ceremony, held in the Oval Office, was part of a two-day event that paired successful musicians with key policy makers, to share with the politicians the vital role music plays in the country's culture and economy.

Garth wasn't the only person to receive an award. The President also received his second Grammy for Spoken Word for 'The Audacity of Hope: Reclaiming the American Dream,' and Garth admitted he was a bit jealous! "He got his second Grammy, which makes him tied with me, which didn't sit very well with me, but congratulations anyway," Garth joked to CBS News. "This was his second one for spoken word, so I think he's turned his focus towards books now, and he'll probably win whatever the big award for books is, because he seems to have a reputation for winning."

One of the few artists who refuses to have his songs available on iTunes at this point, Garth says he knows it's the right decision for his music. "We're an album-oriented artist," he explains. "We always have been. We believe that the songs are an album that can change a person's life, that aren't commercial, single-fit. So we put them all together. And there are commercial [songs] and there are album cuts, but all of them make the album, which should be a reflection of the artist.

Making huge headlines in the '90s with his own spin on country music, Garth says there is plenty of room for traditional country and the music brought by current artists such as Taylor Swift. "I think it's exactly the same way it was 20 years ago when Garth Brooks came out," he maintains. "You'd have to ask [Merle] Haggard that same question, and Haggard might say, 'That punk.' ... If I had my way of what country music is, country music is the news at 5 o'clock, just put to music. It's our way of life as a people. And as long as it keeps reflecting that, it will always be country music, and that's the important thing."

Garth was also treated to an informal performance of his hit 'Friends in Low Places,' led by Marc Roberge, from the band O.A.R., and including several members of Congress. Others on hand for the ceremony included songwriter Paul Williams and 'Face the Nation' host Bob Schieffer.

Garth is currently in the first year of a five-year run as a headliner at the Wynn Las Vegas Encore. Tickets can be purchased here.