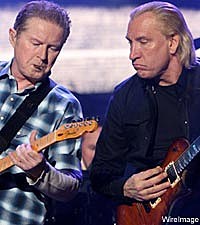 Legendary country rockers Eagles have embarked on a tour with sold-out crowds, some of whom are having to make a change of plans. The group has had to reschedule some shows and cancel others, with very little explanation.

The first discrepancy came with the Eagles' concert originally on the calendar for May 13 at the Key Arena in Seattle, Wash. "We were sold out," affirms Deborah Daoust, Director of Communications for the 13,500-seat venue. But the group was forced to reschedule for May 26. Daoust says that only 900 fans returned their tickets, with 400 of those tickets being scooped up to see the rescheduled concert, so the outpouring of affection for the iconic group was still alive and well ... But the rescheduling mystery remained.

The Eagles' scheduled June 15 show at the Nationals Stadium in Washington, D.C -- with special guests Keith Urban and the Dixie Chicks -- was abruptly canceled back in April, with no explanation other than there was a "scheduling conflict."

Back-to-back shows in mid-May were all postponed -- the May 13 Seattle, Wash. show moved to May 26; the May 17 Portland, Ore. show moved to May 29; and the May 18 Nampa, Idaho show moved to May 30. And shows scheduled for June 14 at Citizens Bank Park in Philadelphia, Pa., and June 15 at Hershey Stadium in Hershey, Pa. were canceled. Refunds are being offered for the shows without alternate dates.

Keith Urban and the Dixie Chicks were scheduled for the stadium venues, so it's unclear how the rescheduled shows will affect their appearances. 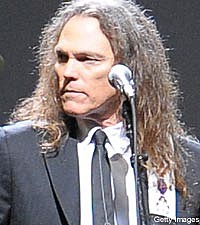 When The Boot tried to track down the reason for the cancellations, we found some preliminary answers via Eagles bassist Timothy B. Schmidt's website. He posted a letter to his fans that explained his "mid-May adventure story." On May 10th, after completing their second show in Vancouver, the band welcomed a two-day break. And on the second day of their mini-hiatus, Timothy started to feel some physical discomfort.

"I tried to ignore it," the singer wrote. "In a nutshell, when I finally cried 'Uncle,' this is what happened: A doctor visit to the hotel ... a visit to the Emergency Room at the Hospital ... tests, cat scans, all that fun stuff ... checking in as a patient in the hospital ... two days of observation, poking, probing, and another cat scan. By Friday, after missing the Seattle show, and now the third Vancouver gig, one choice remained ... surgery. So, there I am, thinking, 'Well, I'm finally at the older-guy-getting-his-first-surgery phase of life.' I was not a happy camper ... By noon that day I was completely sedated, and without over-sharing, undergoing a minor intestinal surgery. I had to stay there to be watched over for a couple more days, and am now, I'm happy to say, writing this from the confines of my own home."

On the mend, Timothy and the 'Hotel California' Grammy winners hit the stage in Denver on May 20 (with subsequent shows on May 22 and 23 in California) and have promised to make up the shows they were forced to miss.

Timothy's latest post on his website appeared on May 24 "to all well wishers," thanking them for all of their letters and emails wishing him well. "Not only did I hear from long time fans, but I was happy to hear from a few people I haven't seen, or heard from, in a long time," he writes. "So it's an understatement when I say, thank you all for your concern, your thoughts, and your prayers."

He goes on to say: "Now, since I already have three post-trauma shows under my belt, let's all put this behind us and continue our quest to be good humans ... I do know you're out there."

Although Timothy's surgery may explain the May cancellations, it doesn't quite explain why the June dates were scrubbed. We reached out to the Eagles' publicist and tour manager via emails and telephone calls on Monday and are still awaiting a response.