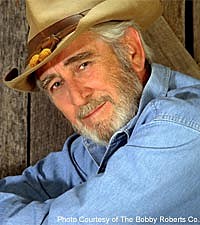 Don Williams fans will have a few more chances to see the 'Gentle Giant' in concert. The Texas native, who will be officially inducted into the Country Music Hall of Fame later this year, is returning to the road for a limited number of concert dates in the fall.

The smooth-voiced singer who will join Jimmy Dean as the newest member of the Hall of Fame at the Medallion Ceremony in late October, had a string of hits throughout his career, including 17 No. 1's. Among his chart-toppers were 'Tulsa Time' and 'You're My Best Friend.' Other hits include 'Good Ole Boys Like Me,' 'Rake and Ramblin' Man' and 'Some Broken Hearts Never Mend.' He also had a major pop-crossover hit with 'I Believe in You' in 1980. Before Don became a solo country star, he was a member of the folk-pop group the Pozo-Seco Singers.

The CMA Male Vocalist of the Year in 1978, Don's single 'Tulsa Time,' was named CMA Single of the Year and was later covered by Eric Clapton. He made an appearance as a band member in the 1975 film, 'W.W. and the Dixie Dancekings,' starring Burt Reynolds, and in 'Smokey and the Bandit 2,' which starred fellow country star Jerry Reed. Ironically, Don also cut a song titled 'If Hollywood Don't Need You (Honey I Still Do),' in which he admonishes his lost love, "If you see Burt Reynolds, would you shake his hand for me."

The entertainer's trademark beaten-up Stetson was given to him to wear in 'W. W. and the Dixie Dancekings.' Although he had not worn hats very much prior to that film, he liked the style that they shaped for him and started wearing it after the movie was released. He once joked that he felt undressed if he went out without it.

Don announced his Farewell Tour of the World in 2006 and true to the name, he performed both in the U.S. and overseas, where he has a rabid fan following. His final concert to date took place in Memphis on Nov. 21, 2006.