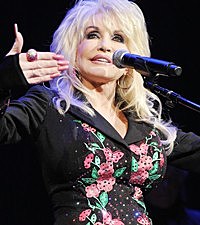 "People talk to me about retiring ... Darlin', I'm the least retiring person you ever met in your life," Dolly Parton confesses to The Star. "I'm not slowin' down, I'm goin' faster. The fewer days I got left, the more I gotta do in them!"

With her 41st studio album, "Better Day,' dropping tomorrow (June 28), the multi-continent Better Day World Tour and a creative director role for the musical adaptation of her 1980 classic movie, '9 to 5,' the 65-year-old singing icon holds true to her word.

With a career that spans nearly 44 years, Dolly has worked with her share of singers, but there are a lucky five who really stand out to the songbird:

On her creative partnership with Grand Ole Opry legend Porter Wagoner, Dolly offers, "He was my teacher, he was my friend. From him, I learned about being honest inside, no matter how many rhinestones you were wearing on your clothes.

Despite their differences in style, Dolly praises her on-stage chemistry with Linda Ronstadt. "She and I were different kinds of ladies who made a different kind of music," she says about the 'You're No Good' singer. "But when we went on stage together, something kinda magic happened. I can't explain it.

On working with Willie Nelson, Dolly explains, "He's a good ol' boy and I'm a bad ol' girl, so we get along just fine. You don't really sing with Willie -- you get up there on stage and let the songs happen to you."

Dolly fondly recalls the magic made with fellow legend Kenny Rogers. "The two of us just work so well together, like a BBQ sauce with honey and mustard in it. I just love the way we sounded on 'Islands in the Stream,'" referencing their 1983 No. 1 crossover duet.

Of the new generation of singers, Dolly praises Carrie Underwood intimate appeal. "She's the real thing," she says, "Another country gal like me who sings from the heart. I loved working with her and I love listening to her."

Although there are no duets on the 'Better Day,' Porter is remembered on 'Together You and I,' a modern remake of their 1974 duet that appeared on their collaborative album, 'Porter 'n' Dolly.' The song serves as the lead single for the 12-song collection.

The singer is set to kick off her Better Day World Tour on July 17 in her home state of Tennessee. The 39-date tour will span the United States and travel to Europe and Australia through November before starting up again for the second leg in early 2012.