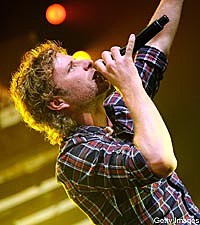 Dierks Bentley's 'Up On The Ridge' CD and tour are akin to a long-awaited train pulling into a station.

Almost everyone knows how it feels to wait expectantly for a train, looking down the tracks and straining to hear the sounds of the wheels on the track. An appropriate analogy for the way Dierks has felt waiting for his career to blossom. But sold out shows like one May 20 at Sixth and I Historic Synagogue in Washington, D.C. and another May 22 at the Ryman Auditorium in Nashville, show his waiting -- for what someone once called "the big big time" -- may very well be over.

"I know it sounds kind of weird, but great shows often [result from the energy] of great crowds," Dierks told The Boot just before his Washington, D.C. concert. "That's definitely happening now. I'm having the time of my life on this tour."

The raucous fans jockeying for space close to the stage, college-age women jumping up and down in the aisles and shouting pleas for permission to join Dierks on his tour bus, and snapshot happy parents with their teenage children, left little doubt the Washington audience had a blast.

"You know, I've played almost everywhere," Dierks told the fans from the stage as she sipped beer from a red plastic cup. "I've played bars, I've played Merlefest, but this is the first time I've played in a synagogue."

However unusual the setting seemed, the audience, Dierks, and his back up musicians -- the Travelin' McCourys (which includes Ronnie McCoury and Rob McCoury, sons of the legendary bluegrass master Del McCoury) and the Punch Brothers -- seemed to make themselves right at home.

As the large menorahs on either side of the stage glowed with purple-tinged lights, Dierks and his band whipped through many beloved songs including 'Train 45,' -- one many attribute to Earl Scruggs -- Kris Kristofferson's 'From the Bottle to the Bottom,' which Kris and Dierks sing together on 'Up on the Ridge,' and of course the title track to Dierks' album. A powerful cover of 'Midnight Rider,' co-written by Gregg Allman, added fiddle, banjo and mandolin to the song thus making it Dierks' own.

Although Dierks has originally planned to release two albums this year -- one country and one bluegrass -- he scrapped the idea and decided to follow his true musical instincts without over thinking format.

"I just kind of stopped worrying about the genre description," Dierks told The Boot. "I decided if we want to use electric bass, let's do it and not worry about it."

Of course, Dierks' love of bluegrass runs deep. He told the Washington, D.C. audience of arriving in Nashville to attend Vanderbilt University and discovering the city's historic Station Inn.

"I walked in and Del McCoury was playing," Dierks told the audience. "I was 19 years old and that night changed by life."

Just before May 22, when Del joined Dierks at the Ryman to sing a duet on the U2 song 'Pride (In the Name of Love),' which Del performs with Dierks on the 'Up On The Ridge' album, he discussed how the song is an example of bluegrass progressing through the years.

"I had never really heard the song ['Pride'] until Dierks sang it for me and said I should join him and sing it on his album," Del told The Boot. "All the music [formats] are so related, you can learn a lot from other musicians. When I was a kid I thought bluegrass was the only thing worth listening to... It wasn't until I was older that I realized how all this music fits together.

That certainly was true as Dierks and his players blazed through the rest of his set, which included 'Fiddlin,' and 'What Was I Thinkin'.'