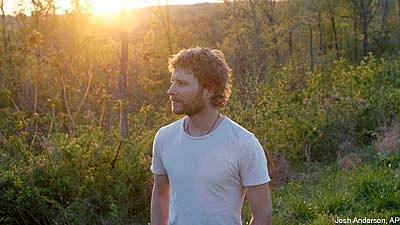 Dierks Bentley is at a cool place in his musical career. His new disc, 'Up on the Ridge' (out today, June 8), is a hybrid of many of Dierks' influences, but heavy on country and bluegrass. That's a pretty interesting feat for a young man who was not even a bluegrass fan until he moved to Nashville and started attending shows at the world-famous nightclub, the Station Inn, which is known for its evenings of bluegrass and acoustic entertainment. Dierks admits he fell in love with the music he found there because it was from the heart. Even though he went into mainstream country, Dierks never forgot those influences or the talented musicians he met, including Ronnie and Rob McCoury, sons of bluegrass great Del McCoury. He also met Terry Eldrege, now with the Grascals, and several other folks who have since made guest appearances on his albums.

When the decision was made to record 'Up on the Ridge,' Dierks went back to some of those same musicians to help record the sound he was seeking. He also tapped Rob and Ronnie and the rest of the Del McCoury Band, known as the Travelin' McCourys, to join him on the recent Up on the Ridge tour, which ended with a huge night of music at the Ryman Auditorium last month. And although 'Up on the Ridge' is being called a bluegrass album by most reviewers, it is a proud moment for Dierks that the title track has made it to the Top 30 on the country charts.

Dierks took time out at the recent BamaJam music festival to talk with The Boot about his bluegrass heroes, the impressive view from his New York City recording studio and the favorite mode of backstage transportation that he shares with Miranda Lambert.

Were you a bluegrass fan before you moved to Nashville?

I got into county music because of Hank Williams Jr. when I was 17, so l listened to all the people he listened to. Then Garth Brooks came along, and I loved Garth. When I came to Nashville, it was in the wake that Garth created. While I loved Garth, I was a little disillusioned that people were not writing their own music as much during that time. I wanted to find out where I fit in, because I did write my own songs. A friend told me to check out this club called the Station Inn, to go check out the Sidemen. These guys were a bunch of kids my age playing these cool instruments. The first night I went in, Rob and Ronnie McCoury were on stage, and that was my first introduction to the bluegrass community. A lot of people think bluegrass is about banjos turned up to 11, but they did country music too, like Merle Haggard and George Jones. They were playing country songs the way it was before there was electric in country music. It was there at the Station Inn that I did fall in love with bluegrass and acoustic music.

Were you worried about crossing genre boundaries on this release?

About this time last year, I thought I would do a bluegrass and a country album in the next year. Once I started working with Jon Randall, these ideas started coming out of left field. I realized right away we were breaking rules, putting drums and electric bass on stuff that was bluegrass. We were cutting a Kris Kristofferson song, one by U2 and one written by Bob Dylan. Then we wrote 'Up on the Ridge,' and we were like, is it country or bluegrass? We didn't know, so we said let's stop worrying about genre description, and just do a great record. Once I got past that, I had the freedom to make this record I'm really proud of. I didn't know if there would be a single for country radio on this album, and I live and die for country radio. I've always got it cranked up. But the only way I could be true to myself and have an honest record was to tell myself that I might not have a song on country radio for a while. So I had to let go of it, and then I could make the record. And now for there to be a song from the album on country radio -- I've never been so excited about a Top 30 hit in my life! For 'Up on the Ridge' to be represented on country radio means a lot to me and a lot to the bluegrass and acoustic community that I know and love. 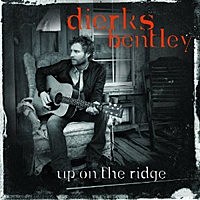 Are there any special moments during the recording of the album that stand out for you?

It was just inspiring to be around Chris Thile and the Punch Brothers. We went to Brooklyn to record with them. To be in their world was inspiring -- bluegrass guys who moved to Brooklyn so they could be in a band, and be in a cool, inspiring place. It's like being in the post-graduate school of bluegrass, they are all are so talented on their own, not just in bluegrass but Bach and Beethoven and all kinds of music. I remember working on the album in their studio in Brooklyn, singing and looking out the window and I could see the Statue of Liberty. That was pretty cool.

You have some other impressive guests on the album, as well, including Del McCoury, Miranda Lambert and Jamey Johnson.

We decided to take the U2 song, 'Pride (In the Name of Love),' to the Punch Brothers, because we wanted a band that was a great acoustic band that could play anything. Then we wanted to get Del to do the vocals. I didn't want to compromise his integrity, but it is a great song, maybe one of the best ones about the subject of love that I know. Del had never heard the song before but when I played it for him he loved it. One of the cool things about this record is that it is organic. When Jon threw 'Bad Angel' at me, I thought about who would be my contemporary if I did it. So I just called up Miranda and Jamey and they both listened and said they wanted to do it and we made it happen. Nothing was orchestrated or planned. Miranda's voice on that song -- she does it so different and cool. And Jamey is so great, the song just turned out great.

Now that the Up on the Ridge tour has ended, what do you have planned for the rest of the summer?

The Up on the Ridge tour was so much fun but now we're turning back to a more modern country show, so we're in the process of tweaking the show for the summer. We'll be doing fairs and festivals, so we won't be putting together a headline tour this summer. We're just gonna go out there and have fun like we always do, with the guys in my regular band. We'll incorporate some of the stuff we learned on the Up on the Ridge tour so we'll have new sounds for our show. In the fall, we're talking about doing another tour but we haven't started on that yet.

When you're at the fairs, do you actually go out there with the fans, ride the rides and all of that fun stuff?

I carry a 1977 Jeep in a trailer behind the bus, so when we get where we're going, we take the doors and the roof off and go cruise around. Sometimes we go say hello to the fans out on the grounds, or just go out and see where we are ... take the Jeep and get out in the country and get ideas for the show that night, so we could make it feel special for that one area. Miranda always loved my Jeep, and now she has a pink mule, a four-wheeler. We took pictures of our two summer vehicles back-to-back and posted them on Twitter. It's a fun way to get out and get around and meet the fans. After five or six years of touring you get more appreciative of the fans supporting the music. At the end of the night they have a great time, singing your songs, so going around saying hi to them, and saying thanks to them, helps me get ready for the show that night. As for the fairs, I don't have a favorite ride right now, but when my daughter gets a little older, I'm sure she'll have a favorite one and I'll be following her around.

'Up on the Ridge' (Boot Exclusive: Making of the Video)