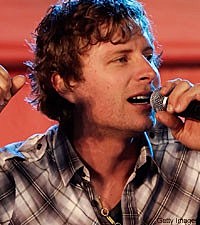 There was a lot of dancing going on Monday at Nashville's FUSE nightclub, where Dierks Bentley shot the video for his latest hit, 'Sideways.' The country singer promises the new video will be different than anything he's done before.

"The song is fun, so we wanted to make a fun video to go along with it," he says. "Since the whole vibe of the record is to have a good time, we wanted to bring that to the video. We tried to do it in a way that keeps it hip and urban and kind of fun, but not too hoochie mama!"

The concept for the video is very much a club scene, with friends getting together in a bar to have a little fun. As the night goes on and the drinks flow, the guy who couldn't dance a bit when he walked in suddenly becomes the person with the best moves on the floor.

Bentley jokes that a lot of research went into writing his new single. "We visited a lot of pubs across the U.S. and Europe to get this song just right," Bentley explains with a laugh. "A lot of thought and Bud Light went into choosing this song as the second single."

'Sideways' is Bentley's highest debuting single, coming onto the country charts at No. 32 this week. It is the second single from his album 'Feel That Fire.' Bentley wraps up the final night of the Paisley Party tour with Brad Paisley and Darius Rucker Friday in Nashville. He'll rejoin Paisley beginning June 5 in Charlotte, N.C. for the kickoff of Paisley's new American Saturday Night tour. Bentley and Jimmy Wayne will be special guests on the 41-city trek.