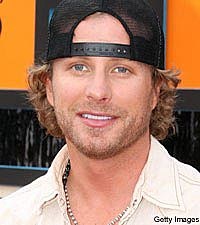 Dierks Bentley has admittedly done a few outrageous things in the past, but the singer's annual lake jump with his "Gladiator friends" -- including his band, fellow songwriters and even a few children -- has to top the list as his craziest feat.

New Years Day 2010 in Nashville was a a bone-chilling 28 degrees, but a YouTube video shows daredevil Dierks in nothing but a pair of swim trunks, doing a 'backwards slow marches' into the frigid waters of Percy Priest Lake. (Watch the video after the jump.)

Dierks admits that a certain point of freeze-framing the video might require going 'audio silent' in order to keep the clip PG-rated. He also reveals that 'critical shrinkage' was definitely experienced in the cold waters.

The annual lake jump capped off an adventurous year for Dierks, who knows a thing or two about male-bonding experiences. In 2009, he struck up a bromance with fellow artist Darius Rucker, and also with a male fan at his Madison Square Garden concert in October.

Dierks also shared a memorable adventure with a fellow -- female -- artist in '09. He's nominated for a Grammy for the duet 'Beautiful World,' with Patty Griffin.