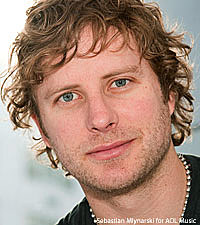 We've all heard the saying, "It's a dirty job, but somebody's got to do it," and Dierks Bentley knows a thing or two about dirty jobs! But Dierks tells the Orange County Register that one thing he hasn't quite gotten used to yet is the job of sex symbol -- a title he's come by in part due to his often steamy music videos.

"Are you kidding me? Come on," says the singer with a laugh. "I'll never get tired of hearing that, though, I love it. Whatever brings people out to the shows and helps get my music into their hands -- if they connect to me in some way through something like a video, that's great."

When it comes to videos, however, Dierks would seemingly rather watch anyone else's but his own. "It took a while for me to just get comfortable hearing my own voice," he says, "but I still don't like to watch myself in videos."

As anyone who has seen Dierks live in concert can attest to, he's a dynamic, energetic performer, but the married father (daughter Evie will turn 1 next week) says he loves to slow things down with the love songs, too. He confesses his male fans find them useful, as well -- when they get in hot water with their significant other.

"Hey, if I can help dudes get out of the doghouse – that is a great thing," he reasons.

Dierks is currently helping men across the country get out of the doghouse and out to concert venues on Brad Paisley's American Saturday Night tour. Like they say, it's a dirty job...