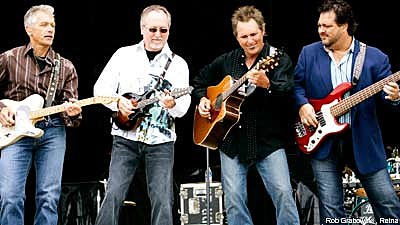 With such inspirational hits to their credits as 'I Believe,' 'Mama Don't Forget to Pray for Me' and 'One More Day,' Diamond Rio have never been shy about recording songs that share their beliefs, but the six-man band takes it a step further with 'The Reason.' The new album, which hits store shelves Tuesday (Sept. 22), is the group's first full length Christian record. The release coincides with the publication of Diamond Rio's autobiography, 'Beautiful Mess.'

"I'm a Christian and I want my life to reflect Christ," says lead vocalist Marty Roe. "We're all believers. We always have been. A lot of our songs reflected that part of who we are, but this was different to actually able to say in a stronger voice what our hearts are about."

Listen to 'The Reason,' track-by-track, after the jump.

Recording 'The Reason' was a labor of love for Marty, Jimmy Olander, Dan Truman, Dana Williams, Gene Johnson and Brian Prout. "The fact that we have recorded songs with positive messages is not by accident. We chose to do that," says Gene. "We've had songs that touched people beyond their ears, and got down into their hearts. When we did 'Mama Don't Forget To Pray For Me,' we were getting letters from people talking about that song and how it touched them. I remember one specifically from a young girl who had ran away from home. She called her mom and dad after hearing 'Mama Don't Forget To Pray For Me.' After months of being gone, that song caused her to call home. That was a powerful thing. It makes you really stop and think. Songs touch people. Sometimes they can influence people's lives more than we realize."

Diamond Rio have been influencing lives with their music for nearly two decades. When they debuted in 1991 with the hit 'Meet in the Middle,' they became the first group in country music to have a debut single reach No. 1. In the years that followed, they have sold 10 million albums and won the Country Music Association's Vocal Group of the Year accolade four times and two Academy of Country Music Awards for Top Vocal Group.

Though many country artists who have made Christian albums have re-recorded classic hymns, Diamond Rio wanted to record new songs, and instead of looking to other songwriters on Music Row to supply the tunes, they wanted to write the songs themselves. "When you are talking about faith and your spirituality, your connection to God, it felt less genuine to let other people speak for us," says Jimmy. "So we've gone to great efforts to try to make sure we've written a record that's from the heart. These songs share what we believe in. This is who we are."

The songs came from the band members' life experiences. Dana wrote 'What Are We Going to Do Now' in the wake of his pastor's death. "He had meant so much to our church," he says. "What were we going to do now? Then it hit me, we're going to keep doing what he's preached for 20 years. It ain't about him. It's about God and about us being faithful and us staying on the path and bringing people to the Lord."

The songs on 'The Reason' are especially meaningful to Marty, who had been battling problems with his voice before this record. "I felt like maybe I'd squandered my gift and I might just not get it back," he confesses. "There was a lot of prayer and just a lot of soul searching. Then I went to this other vocal coach, Diane Sheets, and she's a believer. Things started to turn around immediately. I learned to take care of gifts that you have. I can't be more than what God made me to be and a singer is it."

With the publication of their autobiography, written with veteran Music Row journalist Tom Roland, and the release of 'The Reason,' the band feels they've entered an exciting new chapter. "There has always been a veil on our Christianity and the veil is off," says Jimmy. "We're revealing who we are. We're not preaching. We're not preachers, but we're saying, 'This is who I am and I'm proud of it.' God is working and we're here for a reason."