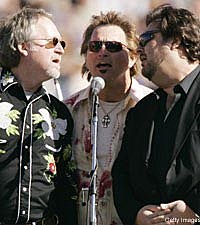 Diamond Rio are breaking new ground. The group will release their 11th album, 'The Reason,' their first to the Christian marketplace, on September 22. In conjunction with that release, they will also publish their autobiography, 'Beautiful Mess.'

The group, which has been named Vocal Group of the Year twice by the Country Music Association and four times by the Academy of Country Music, has been together since 1984. The band's first book chronicles both their personal and professional legacy. Each member of Diamond Rio has their own private story of how God has become part of their life through various events that took place over the years. These real life stories from those experiences are the basis for the songs on the new album.

The first single, 'God Is There,' is an anthem of hope with a powerful and timely message for the state of the world today. Group member Dana Williams penned 'What Are We Going To Do Now' after his pastor passed away. 'Moments of Heaven' was written with the idea of family, friendships and more granting moments of 'Heaven on earth.'

Diamond Rio's Jimmy Olander says the upcoming disc is more a revelation of who they are than a change in direction for them. "We're not preaching, but we're saying, 'This is who I am and I'm proud of it'," he says. "God is working and we're here for a reason."

This isn't the first time for Diamond Rio to show their spiritual side. Their Christian beliefs are also showcased in their classic hits 'I Believe,' 'Mama Don't Forget to Pray for Me' and 'One More Day.'