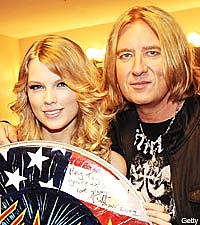 Def Leppard's Joe Elliott swapping vocal leads with Taylor Swift on CMT's 'Crossroads' and on the CMT Music Awards might've seemed like an odd pairing to some, but it was a treat for the rock singer. The iconic frontman has nothing but respect for the country superstar, who was brought up on Def Leppard's music and, according to Joe, has "been a fan since before she was born."

"She's a great girl to work with," Joe tells The Boot. "She's so enthusiastic, because she's so young and talented. Everything's going for her right now."

Age difference aside, Joe can relate to the musician in Taylor.

"The music's not that dissimilar -- a lot of her songwriting is very similar to what we were doing on the 'Hysteria' and 'Adrenalize' albums, so it was easy to do," he says.

Joe reveals that there was only a song or two that didn't work out for Def Leppard's collaboration with Taylor on 'Crossroads.' The rest, he says, "just fell into place."

"We were flattered that somebody so popular wanted to work with us," Joe admits.

With all that admiration for Ms. Swift, would Def Leppard ever be inspired to crossover to the country world?

"That would be untrue to ourselves," says Joe. "But if somebody came in with a song that was slightly leaning toward country, and we thought it was the right thing to do, I don't see why not. It's a very fine line now ... a lot of the country acts sound like rock bands now. "