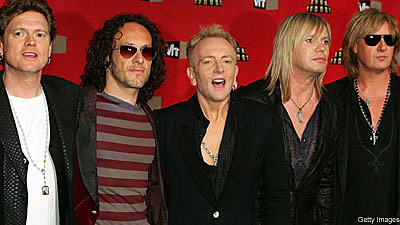 British hard rockers Def Leppard are the latest rock band to make musical friends in Nashville. Like the Eagles before them, Def Leppard are hitting next month's CMT Awards, where they have two nominations, for their work with Tim McGraw and Taylor Swift. Guitarist Phil Collen is looking forward to the show.

Collen has noticed a big difference between the worlds of country and rock: "Whenever you go to anything country -- we were there when we did the 'Crossroads' thing [and] there was a bluegrass convention -- all the people you bump into are really pleasant," he says. "Whereas in the rock world, it's not always so nice."

It might be a little easier to see how the Eagles and ZZ Top, another rock band that's dabbled in country, fit in in Music City. The Eagles, as Collen points out, are a "classic hybrid," and ZZ Top have a sound rooted in the classic American blues and come from the south. But a British rock band with influences from glam to metal? That one's a little trickier. Collen explains the thread: "Taylor Swift loved Def Leppard growing up, because her mom played it all the time. And when she heard Shania Twain sing, that's what kind of started her off singing," Collen says. "And the other connection is obviously the Mutt Lange thing. (Lange produced both Shania and Def Leppard.) When you actually listen to Taylor Swift songs, they're very much influenced by Mutt Lange production and songwriting, which we learned. So it goes full circle. When we did the 'Crossroads' thing, some of her songs, chord-wise, progression, melodically, backing vocals, all that stuff, were really similar to some of the stuff that we'd already done."