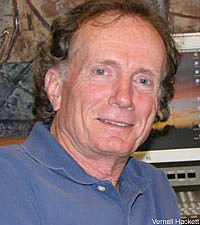 The Boot talks to songwriter Wood Newton (pictured left) about 'Riding With Private Malone,' the 2001 hit he co-wrote with Thom Shepherd for David Ball.

Thom Shepherd and I met on Matthew Gillan's show on WSM radio. I was impressed with his songwriting. He was a young guy and had some cool songs. We got together and he threw this idea out. I'm from that era of the Vietnam war, I was in college during those years. It was one of the most emotional and traumatic things that happened to our whole generation, so I related to it. Thom had the name of Malone, because it rhymed with home. He had seen a story about a guy who had restored a 1966 Corvette and put up a website about it. And he had seen another story about this guy who restored a car and he would tune the radio to one channel but it would always change back to a different station, so he thought the car was haunted. This song had it all, including the excitement of finding a classic car and getting a bargain on it and restoring it; that is an American story.

We chose a 1966 Corvette because it was an amazing icon of American ingenuity. For a young guy, it still stands out as one of the classics of all time. We met about four different times, worked for a couple hours at a time to really get the song right. After we got the lyric right, the music kind of evolved from our original three-chord melody. The song ended up being over four minutes long. It's like some unwritten song law to keep them three minutes or less, but we couldn't find a way to tell the story we needed to tell in under four minutes.

I never thought David Ball would be interested in this song. He heard it when Thom and I were doing a songwriter's show in Nashville and he knew immediately he wanted to sing it. He knew I'd written it, but maybe it was good he heard it the first time coming from someone else. He learned it and worked it up and we recorded it in my studio on Music Row in
Nashville
. He already had the album, 'Amigo' finished, so we didn't know if the song would make it onto that album or not.

I was doing some lobbying in Washington, D.C., for the Nashville Songwriters Association International, and it was the first time I'd been to the Vietnam Memorial. While I was there I get a call from my wife. She told me that [disc jockey] Carl P. Mayfield had played David Ball's guitar/vocal [recording] of 'Private Malone' on one of Nashville's country stations ... and the phones lit up. Carl P. said he had not seen that happen since they first played 'Murder on Music Row' (the Alan Jackson/George Strait hit). At that time we were still discussing with the record label, Dualtone, whether to add the song to the album. After that happened, they decided to include it and they released it as a single in August 2001. After it came out we started getting emails where people said they knew who we were talking about because they knew similar stories that had happened. It took on a life of its own and it's really never stopped. I've been working on a screenplay based on the song.

My cousin, Jeff Davis Newton, from my hometown of Hampton, Arkansas, dropped out of school and was gung ho to go to Vietnam. He had already been in ROTC, so he went over as a lieutenant and he ended up being in serious jungle combat. I saw him the day he got back to Hampton and he had been awarded two silver stars. He was so gung ho that he was going to go join Special Forces and go back. He had a Corvette waiting on him that his ole daddy drove around town. The sad news is he got killed in that Corvette the night he got back. South Arkansas is flat and the roads are straight as an arrow, but there are a lot of deer in the woods around there, so maybe a deer ran across in front of him. It happened at 2 or 3 in the morning, so maybe it was jet lag. No one knows because he was by himself. It's a sad story but the emotion of losing him is still with me, 30 years later.