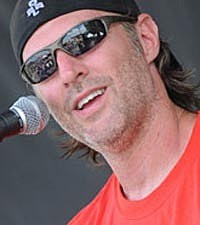 In the vein of his 2003 hit 'Have You Forgotten,' Darryl Worley has released his latest single 'Keep the Change,' about how values have pushed by the wayside. While it makes sense that the song would connect with the country audience, it seems he has been meeting with a bit of resistance in getting the song played. Some people believe 'Keep the Change' is political, but Darryl insists it's more about his love and protectiveness of America than anything else.

"I have gotten into some pretty heated debates already with this song," Darryl tells The Boot. "Before God, I swear to you, I believe this is a patriotic song. And it's a patriotic song coming from, I started to say one guy's perspective, but there were three of us. We all just happened to sit down and come from the same place for this particular song. I might go back and rethink it if I had to do it over again and change the title to something else, because they hear the song title, and they immediately think that we're ripping and tearing into Obama's campaign slogans ("Change We Can Believe In" and "Change We Need"). I've got tons of friends that voted for Obama, President Obama, and I say that respectively. I went and sat with them and played them the song and asked them how they felt. And 90 percent of them said, 'The bottom line is the nation is really angry right now, and we don't think there could ever be a better time in history for your song.'"

Darryl, who co-wrote the song with Jim "Moose" Brown and Phil O'Donnell, says he hoped 'Keep the Change' would get people thinking about what was going on in the world and figure out how they could find a way to work things out.

"You can just look around and I'm not pointing a finger at anyone, we've all dropped the ball," Darryl explains. "And it's really sad, you know? It may be a hopeless case, I may be stupid to think I can write and record a song that might be a wake-up call to people and just have people reevaluate. That's where we were. I asked Moose the night we wrapped it up and we were walking out to the truck. I asked him, 'Why do you think we wrote this song.' And he said exactly what I was thinking. He said, 'I just hope that it might be a wake-up call.' To just sit for a couple of days and discuss these things, we realized that things have really changed ... Obviously, these days we sort of follow our politicians' example. it's like we have to be squared off fighting against each other, and there's not any room for discussion or that maybe, just maybe, like the men that founded this great nation, they had radically opposing, different views about things. But there was never a doubt, I don't think, in any of their minds when they sat across the table from one another that there was a really good and genuine person sitting in both of those chairs. And they knew by the end of the session, or whatever it was, that they would come up together with what was the best for the nation and the people."

The song, Darryl says, has received incredible reaction where it has been given a chance to be heard, however, he does admit that it may not surpass the success of some of his previous hits. "It's probably not going to be a huge radio hit, because of the resistance to it in some places. And sometimes that's OK. One of the things that the country-music industry and radio watches very closely is how something's selling. And this is the kind of song that will sell some product. People will go, 'I can't hear this on my radio station? I'll just go and buy it because I really believe in this song.' We've had it happen before ... all we're doing is asking people to just have a look at things, maybe take a good re-evaluation of where we are, and you might come up with something better than me to make this a better world, a better nation to live in."

'Keep the Change' is the first release from Darryl's forthcoming six-pack album, 'God & Country,' due in stores this fall.