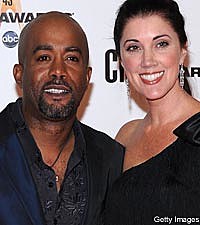 Darius Rucker's latest chart-climbing hit is the love song, 'History in the Making.' Darius fondly remembers his own little bit of history-making magic with future wife Beth after the two met and began dating while Beth was working in New York City.

"I had been trying to get her to go out with me, and she wouldn't," Darius tells The Boot. "I was in New York [with Hootie & the Blowfish], and it was one of those rare nights off. I didn't have anything to do -- we always had something to do when we were in New York! We had the night off, and I was just in my hotel room. She called me and said, 'Hey, do you want to go see this play?' I was like, 'Sure!'"

After seeing the Broadway show, Darius took Beth back to her apartment, but not before declaring what he saw in their future.

Beth and Darius have now been married for 10 years and have two children together. The Rucker family can be seen in Darius' video for 'It Won't Be Like This for Long.'