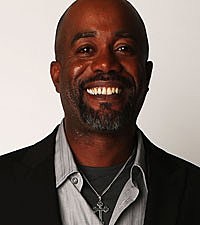 Darius Rucker has achieved a lot of things in his life, including superstardom as both the lead singer of Hootie & the Blowfish, and as a solo country act, but on May 11, he will accomplish something he never saw coming: Darius will give the commencement address as his alma mater, The University of South Carolina in Columbia.

"I've dreamed a lot of things, I never dreamt that [USC] would ever ask me to give the graduation speech," Darius tells The Boot. "I'm just really blown away by that. I'm a Gamecock through and through. I can't wait."

Darius's fans are well aware of his allegiance to the school: he often manages to sneak in the USC logo in his music videos. His group Hootie & the Blowfish formed when he and three classmates were enrolled there.

Darius's message to the newly-minted graduates will be simple: "I'm going to just tell them about giving back, that's going to be my main thing," he says. He got his speechifying feet wet two years ago when he addressed the 2011 graduating class at the Medical University of South Carolina in Charleston, but he says his speaker series ends May 11. "This is the last one. I don't think I'm going to do anymore," he says.

May will be a big month for Darius as his new album, True Believers, comes out May 21. "I want people to just learn that I'm still fun," he says about the new collection, which features the hit "Wagon Wheel." "My records are about life. We took two years with this; we wanted to have great songs and I think we did that."

At USC, Darius will also be presented with an honorary doctor of music degree. Does that mean we have to call him Dr. Darius from here on out?